Normally, I prefer to write about "big picture" topics--what is popular sovereignty?  Why is America exceptional?  What are the core American values upon which our nation is founded?--because they tend to possess timeless qualities.  I also teach a philosophy course from time to time, and I believe that ideas--as the great Richard Weaver put it--have consequences.  Ideas shape and affect us, I would argue, far more than individuals or even large institutions.  It's a bold claim, I concede, but it makes sense when you consider individuals, institutions, and even nation-states and empires are motivated not just by rational Realpolitik, but also by ideas and values.

More practically, focusing on these broader, evergreen topics generally shields me from the pitfall of making bold predictions that turn out horribly wrong (although my post-Brexit predictions post has already been proven so:  it appears Boris Johnson will not be running for leadership of the Conservative Party, much to my chagrin).

That being said, on Monday I'm going to give a quick run-down of some of Republican presidential nominee Donald Trump's potential vice-presidential picks, then share my own thoughts.

But first, a word about the vice-presidency (here comes the "big picture" stuff):  the vice presidency is one of the most enigmatic offices in our constitutional system.  Constitutionally (and historically), the vice president doesn't do much.  His sole constitutional duty (other than monitoring the space-time continuum) is to cast the tie-breaking vote in the Senate, which he does in his capacity as the President of the that chamber.  In fact, prior to the passage of the XII Amendment in 1804, the vice president was simply the candidate who won second place in the Electoral College (imagine an Obama Administration with Mitt Romney as VP).  It almost seems like the office was an afterthought (it wasn't--someone's got to take the president's place if he dies--but the second-place-becomes-veep rule did not anticipate the emergence of the two-party system).

John Adams famously hated the vice presidency (it probably didn't help that Senators derisively called him "His Rotundity"), primarily because it was boring.  He was the first to realize the vice presidency is the "consolation prize" of politics, and for most of American history it was where political careers went to die.  Only in the second half of the twentieth century did it become the stepping stone to the presidency that it is today (that stepping stone used to be Secretary of State, and it may prove to be so again).  Indeed, Theodore Roosevelt's Old Guard Republican rivals in 1900 hoped he would become President McKinley's new VP because it would get the troublesome progressive out of real power!  No one dreamed that McKinley would die from an assassin's bullet only a few months into his second term. 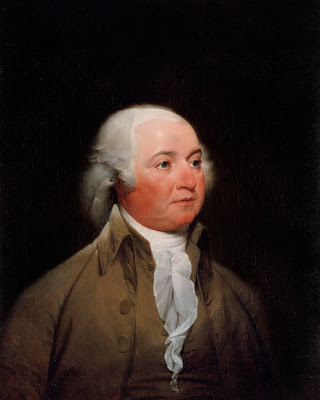 (Note:  the famous Jay's Treaty scene from the HBO mini-series John Adams, in which Adams cast the tie-breaking vote in the Senate to ratify the controversial treaty, was completely fabricated.  Treaties require a 2/3rds vote to become the law of the land, not a simple majority.  Therefore, it would be constitutionally and numerically impossible for a vice president to ever cast a tie-breaking vote on a treaty; indeed, he would have no right to vote at all.  The writers for the show just wanted to create some high political drama, showing Adams making a tough, unpopular choice for the good of the country.  They did so to the detriment of history and constitutional literacy, and unnecessarily--there were plenty of real instances from Adams's life that demonstrated his nobility and selflessness.)

As the power of the presidency expanded throughout the twentieth century, however, vice presidents began to assume more active roles, primarily as a sort of substitute diplomat or pinch-hitting cabinet member for the president.  Richard Nixon, for example, worked as a sort of diplomatic envoy to Southeast Asia during President Dwight Eisenhower's administration.  Now vice presidents routinely travel the country and the world, giving speeches and making appearances on behalf of their respective presidents.


"John Adams famously hated the vice presidency... because it was boring."


For all that, the office is rarely of huge significance in any electoral sense, but it can matter.  Candidates often pick their running mates to shore up real or perceived deficiencies in their own campaigns.  To wit:

- Then-Senator Barack Obama (like John F. Kennedy), for example, chose seasoned Senator Joe Biden (as Kennedy chose Lyndon Johnson) to address concerns that he lacked the depth and experience to run the country.

- Ronald Reagan chose his primary opponent, George H.W. Bush, as a sign of reconciliation and to hold together the Republican coalition of 1980.

- Even Abraham Lincoln engaged in this game:  his first VP, Hannibal Hamlin, was picked because he was ferociously anti-slavery; his second VP, Andrew Johnson--a pro-slavery, pro-Union Democrat--was chosen to appease the so-called "Peace Democrats" in the North.

So, what about Trump's potential picks?  I would caution that we should take his so-called "short list" with a grain of salt.  I suspect that, in true Trump fashion, he's engaging in a great deal of misdirection, and will announce a surprise candidate at the Republican National Convention.  However, I have no real evidence to support this contention--that's why it's a "suspicion," not a theory--so I'll ask that we take him at his word.

For the purposes of Monday's post, then, let's consider his five potential choices (I realize there are others to whom Trump has alluded, but I'm sticking with the ones I've read about most frequently):

I'll go through these candidates one by one (and make additions or subtractions based on any developments over the weekend) and give my shoot-from-the-hip analysis of their strengths, weaknesses, and secret desires (well, maybe not that last one).

Tune in Monday!
Posted by The Portly Politico at 6:30 AM