Near the end of my last post, I included a quotation from the late British Prime Minister Margaret Thatcher.  To recap, it was her famous dictum that "Europe was created by history.  America was created by philosophy."  What exactly does that mean, and why is it important?

As I also pointed out in my last post, European nationality (and, by extension, the European nation-state) is built on notions of blood and soil.  In other words, being French means you are descended from a group of people broadly defined as "French" and you reside within the French "hexagon" (or at least claim that as your home).  Obviously, not every European nation-state still pursues this model--in some cases to their detriment--but some, like Italy, strenuously do.

Now that is one sophisticated hexagon.
(Source:  http://ian.macky.net/pat/map/fr/fr.html)

(Post-colonialism, being "French" includes many people outside of this geographic region, and now the French would more broadly define their nationality through shared language and culture--a model that moves closer to what I perceive to be the American model of nationalism).

In the United States--or, more specifically, in colonial British North America--Americans had a unique opportunity to define their national identity far more broadly.  Indeed, one could argue Americans did so out of necessity:  colonial British North America was a tapestry of cultures, languages, and ethnic groups.  Most hailed from the British Isles and Northern Europe, but the 18th century saw large influxes of Germanic and Scotch-Irish immigrants, not to mention the unfortunate forced immigration of the trans-Atlantic African slave trade.  Most were Protestant of various stripes--the German settlers in particular brought a rich and baffling array of spiritualism and religiosity to a young America--but Catholics and even a small number of Jews also made the trek to the colonies.

The massive Irish and German immigration brought by the Irish Potato Famine and the failed democratic revolutions of 1848, respectively, brought even more diversity to the land at that point known as the United States, and so-called "New Immigration" after the Civil War saw immigrants from Italy, Lithuania, Poland, Russia, Greece, and beyond.

In writing the Declaration of Independence, Thomas Jefferson laid down the framework for what it means to be an American.  Jefferson, like all of the Founding Fathers, believed in the universal rights of men, rights derived not from any worldly, temporal authority, but from God Himself.  Every civics student is familiar with the ringing declaration that "We hold these truths to be self-evident, that all men are created equal, that they are endowed by their Creator with certain unalienable Rights, that among these are Life, Liberty and the pursuit of Happiness."  Herein we see the roots of American values, birthed through the centuries by the tenacity of independent-minded Englishmen and bolstered by the more admirable claims of the Enlightenment.

However, many modern readers miss the first paragraph of the Declaration, which opens with the phrase "When in the Course of human events...."  This seemingly innocuous phrase holds within it deep wells of significance.  Jefferson here is saying that these ideals and rights are not specific to one place or one time.  The "human" here refers, rather, to all of humanity.  The phrase "in the Course of human events" refers to the timeless quality of these values--the self-evident truths of the Declaration apply yesterday, tomorrow, and forever--ad infinitum. 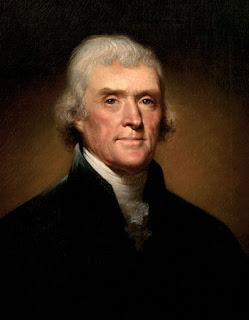 This simple phrase, then, goes a long way in explaining why the young United States was able to hold together in spite of its broad diversity of ethnic groups and religions, while the similarly diverse Austro-Hungarian Empire, which attempted to balance the interests of different ethnic groups by favoring some and oppressing others, ultimately collapsed.  The universal truths of the Declaration, espousing universal rights bestowed by the very Creator of the universe, give all men the opportunity to live their lives as they wish, confident in their liberty and free to pursue happiness and fulfillment as they please.

No doubt this philosophy of God-given liberty has bolstered the United States economically, allowing it become the richest, most prosperous nation on Earth--surely a carrot for future and continued immigration.  Ultimately, however, the most successful and fulfilled Americans, both native-born and immigrant, are those that come to embrace the core philosophy of the American experience.

A sad note in parting:  the increasing ignorance of these God-given rights, and the increasing balkanization of the American nationhood into favored classes and victim groups as a result of said ignorance, is undermining the universal vision of the Founders.  America today looks more and more like the Austro-Hungarian Empire of the early 20th-century:  decadent and splendid on the surface, but torn by internal turmoil and ethnic strife within.

To avoid a similar state, the United States must make a concerted effort to revive the Founders' understanding of the American philosophy enshrined in the Declaration of Independence.
Posted by The Portly Politico at 6:30 AM