Last Friday, I wrote about one of my intellectual heroes, Richard Weaver (and I recommended his masterful treatise Ideas Have Consequences in the wildly popular Portly Politico Summer Reading List 2016).  In that post, I promised to begin a series of pieces "exploring why tradition, morality, and Truth matter to a free society, and how we can restore them."

To that end, I'd like to focus on the importance of family to the maintenance of a free, prosperous society.  This topic should be fairly uncontroversial--that is, if we still lived in a society that did not demonize the traditional family structure while unthinkingly validating less productive--and, indeed, at times destructive--alternatives.

Unfortunately, we seem to take the nuclear family for granted.  We do so at our peril.  I would argue that a host of modern American society's worst problems--generational poverty, increased government dependence, loosening morals--are in many ways byproducts of the destruction of the nuclear family.

In 2012, over half of births to women under 30 were out of wedlock.  72.3% of blacks were born out of wedlock, while nearly 30% of whites were born so.  Compare those figures to the 1950s--before President Lyndon Johnson's Great Society, which wreaked havoc on the black family--and illegitimacy rates were comparably very low, and only somewhat higher among blacks than whites.  Now it would seem that the rising tide of illegitimacy is indeed lifting all ships, and the ill-effects of illegitimacy are decreasingly color-blind. 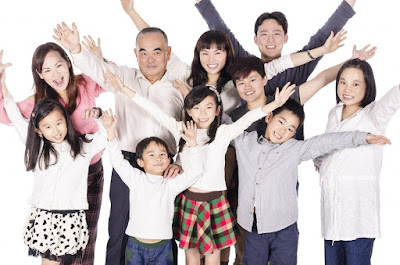 The most adorable public domain family I could find.
(Image Source:  http://publicdomainpictures.net/view-image.php?image=62978&picture=happy-extended-family-isolated-on-white&large=1)

(For more reading, I highly recommend anything written by economist Walter Williams, especially his excellent book Race and Economics:  How Much Can Be Blamed on Discrimination.  I've also used this Williams article in preparing this post:  http://www.frontpagemag.com/fpm/258575/culture-and-social-pathology-walter-williams.  For more statistics--and nice line graphs--check here:  http://www.redstate.com/repair_man_jack/2013/04/26/the-president-planned-parenthood-and-the-black-mass-against-traditional-morality/.  UPDATE:  Here's a link to a transcipt of Democratic Senator Daniel Patrick Moynihan's famous "Moynihan Report," written in 1965 while he was working in the US Department of Labor:  http://www.blackpast.org/primary/moynihan-report-1965.)

It's a testament to the institution's destruction that I even have to argue in favor of it.  The benefits of the nuclear family should be self-evident.  To wit:

- The Family is an Incubator for Morality:  The family is the first place in which children's morality is taught and reinforced.  We all have an inherent sense of right and wrong (except for sociopaths), but the family helps to develop the conscience and to give morality meaning, usually through a system of punishments for bad behavior and rewards for the good.  Parents (ideally) model good behavior for their children, and take an active role in inculcating proper behavior.

Indeed, self-government is impossible without this moral instruction:  we learn self-control and -restraint so that we can live freely.  Without such moral instruction, we raise generations of adults who are unable to control their impulses and who fail to understand the consequences of wickedness.  Therefore, a poor or incomplete moral upbringing breeds more criminality and recklessness, causing a growing portion of society leaning on the state for support.


"Without such moral instruction, we raise generations of adults who are unable to control their impulses and who fail to understand the consequences of wickedness."


- The Family is a Generational Anti-Poverty Machine:  I am able to live a modest, comfortable life on a private school teacher's salary (it's noticeably less than that of public school teachers in the State)--and was able to pursue two degrees in History/Advanced Trivia--because my father read water meters while going to school full-time, and because my parents scrupulously saved money (and taught my brothers and me how to do the same).  My father was able to teach me those lessons because his father accepted Christ.  His father--from what I can discern--was a restless gadabout who played piano in juke joints and lumber camp bars.  My grandfather reversed what could have been a negative trend of absenteeism and amorality.

It took three generations of self-restraint and moral uprightness to build a solid foundation.  Even then, it required loving moral instruction from my parents to help preserve the gains of the past.  The hard work and sacrifice of my parents and grandparents not only taught me how to fend for myself; it provided (and continues to do so) a powerful economic incubator.  Without that sacrifice, I would have been unable to attend college, or would have become massively indebted doing so.  I'm able to slam money into retirement now because dad read those water meters, went to college, and worked his way up in municipal government.  In the process, he taught me to work and study hard (which is why I spend most of my summers painting classrooms and trimming the football field).

Former Pennsylvania Senator Rick Santorum was right when he called the nuclear family the most effective anti-poverty program available.  It works!

- The Family Provides a Model for Masculinity and Femininity:  The image of the sexy single career mom--the one who doesn't need a man to raise a kid--and the schlubby, do-nothing dad are probably two of the most destructive notions ever to plague the modern West.  Don't get me wrong--I'm all about women pursuing their dreams and careers as they wish.  What I object to is the unrealistic notion that somehow people can "have it all"--all the rewards of work, family, and the like--without any of the necessary sacrifices that come with them.  It's selfish to want and expect everything, even at the cost of a child's well-being.  Further, any objective observer will acknowledge that it's harder to raise a child with one parent rather than two.


"[S]tatistically and historically, the best possible social arrangement for the rearing of children is the traditional family structure headed by a mother and a father."


Allow me to make a point that is, unfortunately, now controversial:  men and women need each other.  Yes, that's a generalization.  Yes, there are some exceptions.  But, broadly speaking, it's the truth most of the time.  More importantly, children need a mother and a father.

Please note:  I'm not arguing that a stable, same-sex couple or a single person shouldn't be allowed to adopt a child.  The need to find good homes for orphans far outweighs the potential shortcomings of lacking a male or female role model.  Nor am I arguing that all traditional families are always perfect--far from it.

What I'm saying is that, statistically and historically, the best possible social arrangement for the rearing of children is the traditional family structure headed by a mother and a father.  It's pretty much the way we're designed.  Children need and receive different things from their fathers than they do their mothers, and vice-versa.  Young boys learn how to be good men from their fathers.  That means they learn how to treat women with respect, among other things.  Little girls, for that matter, learn different lessons from their fathers than their mothers.

As I often tell my students, men and woman are different, but equal.  One sex isn't better than the other, but both are complementary and possess intangible qualities that the other needs.  That's why marriage is a coming together of two people to make one.  And, again, it's just the way we're made.

There's a reason the nuclear family is a subject near-and-dear to the hearts of social conservatives, and why we despair upon seeing the rise in illegitimacy rates and the decline of traditional marriage.  The nuclear family as an institution and social arrangement is hugely successful, yet we've jettisoned it from society in favor of... practically nothing.  If all arrangements are deemed equally valid, then none of them is worthy of supporting.  Thus, why bother?

At that point--the point, I fear, we have reached now--there is little hope that the next generation will enjoy, on the same scale, the manifold benefits the nuclear family provides.

This sobering reality, more than anything else, is our true national and civilizational crisis.  To repair it will require an acknowledgement of the benefits of the traditional family structure and an emphasis on the proper roles mothers and fathers are to play in the moral lives of their children.
Posted by The Portly Politico at 6:30 AM