The Land of Plenty--Thanks to Capitalism

Americans celebrated the Fourth of July this past Monday.  For European readers (apparently, I get between two or three French readers every day--merci!)--or people living in progressive enclaves in the cities or up north--allow me to explain how our Independence Day celebrations work:

- Tons of food:  As will come as no surprise, Americans love to eat.  What better way to celebrate the bounteous blessings of freedom than by consuming copious amounts of barbecue (pulled pork, of course, preferably mustard- or vinegar-based)?

- Fireworks:  We like to blow stuff up (not the way radical Muslims do--we do it for fun, or to protect the weak and defenseless).  Note that we are the land of glam metal and Kid Rock.  Again, what better way to celebrate prosperity than by exploding lights in the sky, all choreographed to the strains of "Rock Me Like a Hurricane"?

- Family:  Despite the rapid growth of children born out of wedlock, and increased rates of co-habitation (and decreased rates of marriage), we Americans still honor the importance of family as the building block of any productive society.  Families also instill the values of a nation, and are the incubators of the kind of self-government and personal self-control that are the cornerstones of a free people and a free republic.

There are, of course, many other reasons to love the Fourth of July--great weather, awesome parades, bald eagles--but what makes all of this celebrating possible?  How is it that even the least-fortunate Americans are able to enjoy a hot dog and fireworks on the Fourth? 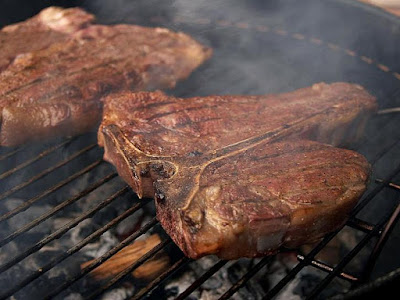 Sure, it's not South Carolina pulled-pork, but I'd eat it.
(Source:  http://www.public-domain-image.com/free-images/food-and-drink/barbecue-grilling-food/porterhouse-steaks-grilling-barbecue-grills-meat)

The answer is the prosperity made possible by our Constitution and the Declaration of Independence.  The Declaration clearly sets forth the right of all humans to "Life, Liberty, and the pursuit of Happiness."  The "pursuit of Happiness" is no idle phrase or call to hedonism; rather, it enshrines the freedom of any person to pursue that life which is most fulfilling to him, so long as he does not infringe upon the liberty of other free men.

The Constitution--which Abraham Lincoln called the "frame of silver" around the "apple of gold" of the Declaration--provides the legal and institutional framework to safeguard liberty.  The Constitution is also, as free-market economist Milton Friedman once said, the "rules" of the economic "game."  Not only does it protect the rights of individuals against the power of the state; it also spells out how individuals can pursue happiness by limiting the government's ability to jury-rig the economy in support of favored or well-connected interests (at least, that's how it's supposed to work).

The Constitution establishes an incredibly flexible economic framework that strictly limits congressional power to a few areas.  In other words, the Constitution enshrines a (lightly regulated) free market capitalist system.

Capitalism--when supported by a pro-growth government, protected by rule of law and the courts, and sustained by a free and responsible people--has done more to improve human life than any other economic or political system ever devised.  When China adopted free market reforms in the 1980s, it transformed from a massive, impoverished nation that experienced widespread famine and low productivity throughout the Maoist years into an economic powerhouse.

(China's continued reliance on corporatist schemes and non-representative authoritarian rule, however, has finally caught up with it; China will either become more free politically, or more repressive and, therefore, less productive; my bet is on the latter.)


"The 'pursuit of Happiness' is no idle phrase... rather, it enshrines the freedom of any person to pursue that life which is most fulfilling to him."


Capitalism works so well that we occasionally seem to enjoy too much prosperity.  Throughout history, people have struggled against hunger.  Now, people in the Western world struggle to lose weight.  We often see the worst cases of obesity among the poorest members of society.  What kind of system creates so much food, at such a low cost, that it actually makes poor people fat?

For that matter, capitalism has created so much wealth, we can now afford to pay more money for food that is produced less efficiently.  The very hipster-elites that decry capitalism and "systems of oppression" at Bernie Sanders rallies can only enjoy their trust-funded non-GMO, organic, pesticide-free kale salads because capitalism gives people the ability to choose to eat these foods (for what it's worth, I'm on an all-GMO, factory-farm only diet).

Imagine transporting an American from 1933--during the Great Depression, and not even 100 years ago--to 2016.  He would be dumbfounded to find poor Americans struggling with fatty diets, and skeptical to witness the spiritual descendants of the New Dealers pushing for limits on the size of Coke bottles he could purchase.  He would also be blown away by the massive diversity of goods and services available (like the two-liter bottle of Coke).

Capitalism is not perfect.  It depends upon a fair and predictable legal system, and a people committed to self-control and self-government.  If anything, capitalism creates so much luxury that people become unwilling to do the work necessary to maintain their comfortable lifestyles.  It also creates enough wealth to shield its beneficiaries from poor decisions and bad moral choices, the costs of which are shifted to responsible citizens.

Nevertheless, capitalism is vastly preferable to the alternatives, and for every layabout there are dozens of eager upstarts ready to try something new.  To continue to enjoy its fruits, we must recommit ourselves to personal self-control, self-government, and moral instruction.  Otherwise, we'll party ourselves into perdition, all the way voting ourselves "free" goodies from the public treasury, because the prosperity we've earned will been seen as a "right," not a privilege.

Let's avoid this fate.  Let's exercise a little self-control--and demand it of our elected officials, too.  Then let's eliminate confusing, onerous regulations and once again unleash the creative potential of 330 million Americans.  That's a recipe for long-term happiness.
Posted by The Portly Politico at 5:30 AM