What is Popular Sovereignty?

On Wednesday, 8 June 2016, I posted a piece entitled "American Values, American Nationalism."  In that piece, I discussed the "Five Core Values of America," a set of values inspired by a government textbook I used to use with my US Government students.  The second value, "popular sovereignty," is deals with the idea that power in our political system ultimately derives from the people--as Abraham Lincoln said in the Gettysburg Address, our government is "by, of, and for the people."

This post received quite a few comments on my Facebook page, including this one from a good friend of mine: 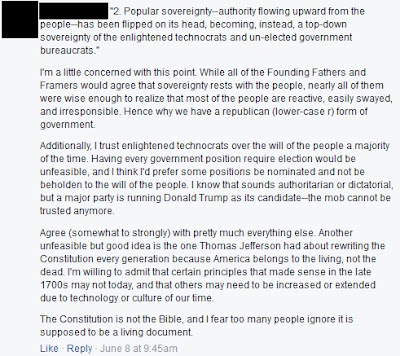 My friend raised a very valid point:  the Framers of the Constitution were suspicious, if not outright terrified, of democracy.  Aristotle had identified democracy as one of the "bad" forms of government that came when rule by the people went bad.  The Framers had seen the consequences of a federal government that was too weak, namely the barely-contained chaos of Shays' Rebellion in 1785.  Naturally, they wanted a government by, of, and for the people--thus the requirement that the Constitution be ratified by 3/4ths of the States in special ratifying conventions (designed to circumvent the Anti-Federalist state legislatures)--but they recognized that unbridled populism would lead to demagoguery.  It's pedantic to say it, but Nazi Germany is the quintessential example of a desperate people granting dictatorial powers to a charismatic individual.


"Pure democracy, without any checks on the majority's power, quickly turns to one-man authoritarianism."


The French political philosopher Montesquieu argued that the English government succeeded because it balanced monarchy, aristocracy, and democracy effectively, which further influenced the belief of the Framers that government should filter the will of the people through a complex system of checks and balances, and a rigorous, jealously-guarded separation of powers.  Thus we have such institutions as the much-maligned (but quite brilliant) Electoral College, and a Senate that is designed to act as a break on the people's (often fickle) will.  Indeed, before it was corrupted by the XVII Amendment, the Senate was intended to represent the interests of the States themselves, rather than the will of the people, which is represented in the House of Representatives.

So, how did I address my friend's concerns?  Here is my reply (with some minor edits for clarity and brevity) to my friend's remarks, and to elaborate on the concept of "popular sovereignty":

You are correct in noting the skepticism with which the Framers viewed unbridled democracy. There was much wisdom in their skepticism, precisely out of concern that a well-positioned demagogue could, in the right circumstances, sway the fickle populous to his whims. Pure democracy, without any checks on the majority's power, quickly turns to one-man authoritarianism.

When I write about popular sovereignty, then, perhaps it would be more accurate to say that I mean "consent of the governed." The people consented through our constitutional order when they elected delegates to special state ratifying conventions (circumventing the generally Anti-Federalist-controlled state legislatures). The people, then, ultimately gave consent to that government, and continue to do so through regular elections. Of course, a complex system of checks and balances tempers the will of the people (voiced primarily through the House of Representatives, which controls the power of the purse), balancing with it the will of the States, and vesting a great deal of authority to halt dubious legislation in the hands of the executive.

Of course, I would argue strenuously for an originalist reading of the Constitution and its amendments, all of which should be read in the context of those who proposed them. This still allows for changes through the amendment process, and for congressional elaboration. The Constitution is not meant to cover ever eventuality, and gives a great deal of space to Congress and (this is important and often forgotten) the States.

"It approaches something like tyranny when the President has the power to write laws (indirectly through the bureaucracy he manages) and to enforce them."

As for your comments about technocrats, perhaps I should clarify here, too. What I am primarily concerned about is the ability of federal agencies to write their own rules, many of which have the force of law. This practice is dangerous because most of these federal agencies operate within the executive branch and have little congressional oversight. Law-making powers are meant to rest solely within the Congress, and the job of the President is to duly enforce those acts to the best of his ability. It approaches something like tyranny when the President has the power to write laws (indirectly through the bureaucracy he manages) and to enforce them. Even scarier is the prospect that the federal bureaucracy has become so large that the President cannot exercise effective control over it, or even know what it's doing! Many presidents--particularly our current one--have used bureaucratic rule-making to push unpopular measures without input from the people's representatives. Congress is complicit in this, as it has delegated these powers to the executive bureaucracy, and the Supreme Court has allowed it to do so.

That being said, you are absolutely correct that there is a need for an intelligent, qualified, and motivated civil service, and, naturally, we want our dams to stay sealed tight and our roads to be paved and efficient. I would never dream of proposing we elect, say, the head of the South Carolina Department of Transportation. Here, again, the Constitution provides precedent: at the national level, the President appoints his cabinet heads, as well as federal and Supreme Court judges and justices. The Senate, however, has the responsibility of confirming these nominations, helping to prevent egregiously bad appointments.

If these proper checks and balances are maintained--if the different branches stick to their constitutional duties and limits, and if the proper relationship exists between the federal government and the several States--even a reckless executive can only do so much damage. If Congress vigorously protects its legislative prerogatives, an unqualified or authoritarian-minded president may still do some harm, but his ability to do so will be greatly diminished, and the damage can be contained.

This conversation went back and forth for a few more posts, which I will possibly include in future pieces.  In the interest of space--as this rumination is already quite lengthy--I will refrain from sharing them now.

However, I would ask that you permit me one parting thought:  we should be on guard against the lionization of the presidency.  The Congress--which represents the people and is, therefore the seat of popular sovereignty--may be consistently unpopular, but it is the proper branch to resist the huge expansion of the presidency.  Presidents increasingly attempt to speak for the people, but in a country that is divided between two entrenched, fundamentally incompatible political philosophies, it is nearly impossible to do so.  Indeed, attempting to do so leads to a Rousseau-style attempt to impose "the common will" on people--whether they want it or not.

Instead, let's speak for ourselves.  We can do that through involvement in local politics, but also by communicating with our Congressmen and Senators.  Let them know that we expect Congress to reclaim its proper legislative powers from the executive bureaucracy.

Posted by The Portly Politico at 6:30 AM