As I've written before, the Democratic Party enforces remarkable party unity, and I expect that many discouraged Sandernistas will ultimately, if not enthusiastically, support Hillary Clinton.  That being said, the Democratic National Convention has so far been much more contentious than I imagined.

It's certainly been more frayed than the Republican National Convention.  To watch media coverage of last week's convention in Cleveland, one would have thought delegates were on the verge of running Trump out on a rail and nominating John Kasich instead. 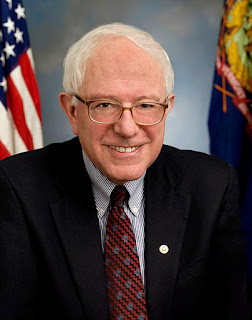 What exactly were the major "scandals" of the RNC?  Melania Trump gave a speech that contained one paragraph of broad, saccharine, generic platitudes that (admittedly) tracked very closely to a similar section of a speech First Lady Michelle Obama gave; Never Trump delegates essentially demanded a roll call vote by delegation; and Ted Cruz offered a non-endorsement of Donald Trump.  If anything, Cruz's non-endorsement actually did a great deal to bring Republicans together around their nominee, as did Trump's strong acceptance speech Thursday night.

Contrast that with the first two days of the DNC:  Bernie Sanders supporters booed when their hero encouraged them to vote for Hillary Clinton; the DNC stalled to avoid accepting paperwork that would have challenged Senator Tim Kaine's nomination as Clinton's running mate; the Sandernistas booed the California Congressman Nancy Pelosi--and Sanders again!--at a meeting Tuesday morning; and Clinton's team crafted a plan to drown out unruly Sanders supporters during Tuesday night's nominating vote.

Oh, and disgraced former Chairwoman of the DNC--and now honorary chair of Clinton's campaign team--Debbie Wasserman Schultz was denounced loudly by her own Florida delegation.


"[Sanders supporters] were listening to their messiah, and he'd been crucified by the very party and candidate at whose convention he spoke."


Add to this flurry of disaffection last week's Democratic National Committee e-mail scandal, which saw WikiLeaks release nearly 20,000 DNC e-mails--some of which demonstrate the open collusion between the DNC, the Clinton campaign, and reporters--and the Democratic National Convention is a tinderbox.

The Sanders movement has evolved beyond the control of its titular leader.  As I watched Senator Sanders give his speech at the DNC Monday night, I was struck by the number of people--mostly women, but some men--who were openly weeping as he spoke.  I also noticed the absolutely awe-struck gaze some of these (mostly young) people had.  They were listening to their messiah, and he'd been crucified by the very party and candidate at whose convention he spoke.


"For some Democrats, the cry of 'I'm With Her' sounds more like 'Long Live the Queen.'"


Clinton will now desperately try to regain the Party's composure.  Upcoming speeches from President Obama and other Democratic Party stalwarts will have to convince disaffected Sanders supporters that their favorite programs and policies will be advanced under a Clinton administration.  Senator Tim Kaine, Clinton's bland but safe running mate, will have to make the case that a Clinton-Kaine ticket offers the same progressive punch as a Sanders-Warren one.

Through it all, look to media commentators to downplay the divisions.  There will also be a lot of tut-tutting over the behavior of Sandernistas, and smug remonstrances to "get behind her."

The popular, populist, anti-establishment candidate--for better or for worse--won the Republican Party and staved off a full-scale civil war.  The corrupt, corporatist, establishment crony of the Democratic Party will have to do the same.  Fortunately for her, she already has ample media, institutional, and political support behind her, ready to quell any further rebellions.

For some Democrats, the cry of "I'm With Her" sounds more like "Long Live the Queen."
Posted by The Portly Politico at 6:30 AM