The Democratic National Convention - What to Expect

With a sometimes rough, sometimes raucous, but ultimately uneventful (in the sense that "no one got hurt physically"; it was a big success for Trump) Republican National Convention in the history books, the nation's attention turns to the Democratic National Convention in Philadelphia.  Donald Trump's seminal acceptance speech--the best he's ever given, and which I'll discuss in a later post--sparked immediate speculation as to the Clinton campaign's next move.  Hillary Clinton's announcement on Friday of her running mate, Virginia Senator Tim Kaine, failed to steal attention away from the Trump campaign, nor did it boost the Clinton campaign as hoped.

Instead, a breaking host of scandals emanating from the leaking of nearly 20,000 Democratic National Committee e-mails has diverted the wrong kind of attention to Clinton, the Democratic Party, and their convention.  It appears the DNC actively worked against Senator Bernie Sanders, cooking up ways to undermine his energetic campaign.  DNC Chairwoman Debbie Wasserman Schultz is the first casualty of these leaks.  It seems the Democratic Party struggles with e-mail encryption. 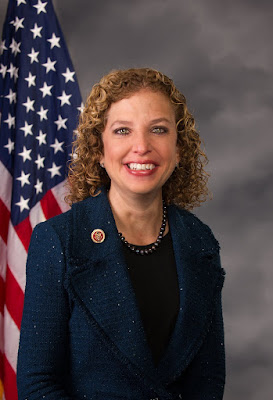 At least one Democrat will be brought down by an e-mail scandal this year.
(Image Source:  https://commons.wikimedia.org/wiki/File:DWSPortrait.jpg)


In light of these events, here are some things to look for at this week's Democratic National Convention:

- The E-Mails:  I'm very curious to see how, if at all, Democrats address this leak.  While I sympathize with their organization's plight--probably the only time I'll ever be able to write such a thing--and abhor such hacking chicanery, the e-mails are out and there's no going back.  Wasserman Schultz will step down as Chairwoman of the DNC, and CNN is already reporting that she won't be speaking at the convention.

There are two possible responses:  don't talk about the e-mails at all, or play for sympathy.  I could see Clinton (or some Democratic operative or B-list congressman) denouncing hacker Guccifer 2.0 as an agent of the Trump campaign or some such nonsense.  They would be right to point out the wickedness of such criminal activity, but explaining the contents of their e-mails--especially open collusion with reporters and media outlets to run stories favorable to Clinton--is going to be very difficult.  I imagine it will be so difficult, they won't even try.


"[A] breaking host of scandals emanating from the leaking of nearly 20,000 Democratic National Committee e-mails has diverted the wrong kind of attention to Clinton, the Democratic Party, and their convention."


- Tim Kaine:  Clinton's pick of Tim Kaine as her running mate is significant.  Rather than go for a progressive firebrand like Massachusetts Senator Elizabeth Warren--a pick that would have fired up the base--Secretary Clinton went for a safe, reliable Senator with extensive public service and executive experience.  Kaine is a compromiser--a "progressive who knows how to get things done," Clinton said, echoing her description of herself from a Democratic primary debate last fall--and is apparently well-liked on both sides of the aisle, even by Texas Senator and die-hard conservative Ted Cruz.

Clinton's pick sends two messages:  one is that her ticket is the safe pick, and that establishment Republicans squeamish about Trump have a place to turn.  The latter is a long shot; yes, there will be Republicans who will vote for Clinton, but their numbers are dwindling.  Kaine also leaves the ultra-progressive, Warren/Sanders wing of the Democratic Party unfulfilled.  As I've written elsewhere, Democratic Party unity is often a remarkable thing to behold, but in light of the blatantly pro-Clinton position of the DNC the leaked e-mails reveal, that wing could be dissatisfied enough to stay home on November 8, or to vote for the Green Party's Jill Stein.


- Clinton's Acceptance Speech:  Just as Trump's acceptance speech breathed life into his campaign and helped to assuage many Republicans' fears, Clinton's acceptance speech will have to electrify the Democratic base.  I imagine she'll use a good chunk of it attempting to discredit Trump, and she'll continue the claim that his speech was based on fear, while her campaign will be about hope.  She'll also promise to continue "fighting"--something she says she loves to do--for greater equality, access, and wages, but Trump has stolen her thunder on some of these issues.

Throughout this week, be on the lookout for a parade of telegenic, preferred-identity "victims" who will talk about how this or that government program saved their lives, or how the lack of free college and two-years paid maternity leave made their lives difficult.  The Democratic Party loves nothing more than to march out useful mouthpieces for whatever their cause-of-the-moment happens to be.

There was a diverse array of speakers at the RNC, in part as an attempt to dispel the myth that Republicans are just a bunch of old, white men (just look at South Carolina's elected officials and you'll realize right away diversity of the Republican Party).  It's also very difficult being an openly conservative minority--there's no great financial or professional benefit to being, say, a black Republican, and a great deal of scorn that can come with it.  Being a minority Democratic, on the other hand, comes with unlimited praise and media accolades, as we'll see this week.

(To be clear, there's nothing wrong with hosting speakers of multiple ethnic backgrounds at any function, but I think any reasonably honest person will recognize the unfortunate, racialist games our politicians play, either to avoid criticism or to garner praise from those who care about such skin-deep "diversity."  This statement is merely to clarify that my issue isn't with minorities speaking their minds--race shouldn't matter, ideas should--but rather with the portrayal of certain groups as deserving of or requiring special treatment, and of exploiting sympathy for those groups to push a coercive political agenda.)

Otherwise, the three items above are the big ones, and I'll be interested to see what unfolds this week.  Regardless, let's hope for a peaceful convention; love them or hate them, the Dems deserve their chance to make their case to the American people.
Posted by The Portly Politico at 6:30 AM