Every August, just before the new school year begins, I reread the introduction of Richard Weaver's seminal Ideas Have Consequences (1948), one of the foundational texts of the modern conservative movement.  It is one of the most eminently quotable books I've ever read, and every page of the introduction contains a gem.  I undertake this annual ritual as a way to prepare myself mentally, spiritually, and morally for the year ahead, and because philosophy is hugely important.

The crux of Weaver's argument is that a relatively innocuous notion, William of Occam's nominalism, "which denies that universals have a real existence," ultimately led philosophy "to banish the reality which is perceived by the intellect and to posit as reality that which is perceived by the senses.  With this change in the affirmation of what is real, the whole orientation of culture takes a turn, and we are on the road to modern empiricism."  As such, the "denial of universals carries with it the denial of everything transcending experience," and ultimately "the denial of truth."  (Weaver, 3-4)

In other words, Weaver argues that nominalism set man on the path to moral relativism, which now dominates Western culture. 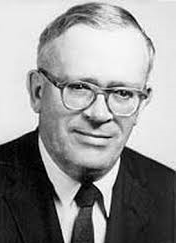 Those glasses probably had consequences for Weaver's dating life.
(Image Source and Attribution:  By Source (WP:NFCC#4), Fair use, https://en.wikipedia.org/w/index.php?curid=46415555)

Throughout his work--which I hope to explore more thoroughly in future posts--Weaver makes his case eloquently and succinctly (the whole book runs to just over 100 pages).  Anyone who has ever experienced a general sense of displacement in the postmodern world will find much in Weaver's work that rings true:  the decadence of modern society, the sense of alienation that haunts men, the gradual erosion of basic rights (after all, how can there be universal rights if there are no universals, or any true foundation upon which to base those rights).

Weaver argues that a single idea--nominalism--possessed ramifications that reverberated throughout the centuries.  Similarly, I would contend that the erosion of belief in the transcendental has resulted in a debasement of culture.

The story of the West is the story of philosophical inquiry and the quest for Truth.  I agree with Weaver--ideas have consequences, and shape everything from public policy and political theory to the fine arts and morality--and Western civilization gradually came to articulate rights that derive from that Truth (or God).  These rights are universal and precious.  They are woven into the very fabric of existence.


"[E]rosion of belief in the transcendental has resulted in a debasement of culture."


Thus emerged, from a marriage of Judeo-Christian faith, Greco-Roman philosophy, and (much later) Anglo-Saxon constitutionalism, ideas such as individual liberty, the sanctity of private property, the importance of freedom of religion and tolerance to protect men's thoughts and souls.

Once faith in these transcendental values was shaken by a cold, unflinching empiricism--after all, one cannot see justice, honor, or virtue--the cracks in the foundation slowly spread, until, one by one, the pillars of a Truth-oriented society crumbled.

Words once imbued with awe and power have been distorted or reduced to meaningless platitudes; some examples:

- "Justice" now is often "social justice," which amounts to a vindictive form of score-settling for historically-aggrieved groups.  There is no blind balancing of the scales, but bitter accusations of "privilege" and "cultural appropriation."

- "Community" has been replaced with "globalism" and "cosmopolitanism," which demand an artificial reduction of identities into an arid, sleek denominator.  Focusing on those near us, and to committing to a place and its traditions, are denounced as narrow and parochial interests.

- "Art" is doing anything that's "trangressive," but if there are no boundaries, how can they be pushed?  Rather than study great artists, learn their techniques, and then strive to build upon and actually create something genuinely new and artistically exciting, "artists" put their unmade beds into museums.

- "Family" is no longer the stable foundation upon which a free society is built.  Instead, it's an amorphous term that validates any number of arrangements that don't recognize the obligations, duties, and relationships of family members to one another.  The state will provide, so who needs the support of the nuclear family?

"Once faith in these transcendental values was shaken by a cold, unflinching empiricism... the pillars of a Truth-oriented society crumbled."


The examples are, sadly, numberless.

Without any firm foundation in a moral universe, such dislocation and distortion are inevitable.  The lack of a unifying acceptance of transcendentals is why, more than anything else, there is such division in the United States and the West today.

There are, broadly, two camps:  those who reject transcendental Truth (and, ironically, create their own orthodoxies and religious precepts in the process) and those who accept it.  I fear the latter is losing--and has been for some time--this struggle for the soul of the West.

If the important things--family, community, justice, art, culture, tolerance, republican self-government--are to survive, it will take a re-dedication to the quest for Truth in an age that has, I'm afraid, utterly rejected it.

As such, I will dedicate the next few Fridays to exploring why tradition, morality, and Truth matter to a free society, and how we can restore them.
Posted by The Portly Politico at 6:30 AM