Last Friday I wrote a post entitled "Family Matters" about the decline of the traditional family in the United States and the West, which I called "our true national and civilizational crisis."  To my surprise, the post was very well-received and popular.  To date, it is the second-most read blog post on the site, and I look for it to eclipse the most-read entry, "American Values, American Nationalism."  It certainly shattered single-day records for The Portly Politico.

It also garnered quite a bit of discussion on my Facebook page, where I always share links to these posts.  There was a great deal of excellent discussion, including questions for clarification on some points.  People also shared some of their personal experiences with matters of family and what sorts of arrangements work and in what circumstances.

As such, I thought I'd dedicate today and Wednesday's posts to following up on some of the comments, questions, and observations I received.  I do so to facilitate further discussion and to help clear up any confusion about some of my contentions.

(Note:  As I wrote this post, I decided to split it into [at least] two parts.  Wednesday's portion will deal with questions about same-sex couples and the impact of the Great Society upon black families.)


- Divorce:  I did not mention divorce at all in Friday's post, but many of the comments I received dealt with this painful scenario.  Certainly, no picture of the decline of the traditional family is complete without a discussion of dissolved unions.

With roughly 50% of marriages ending in divorce, the model of the stable, two-parent family is further threatened, although increasingly families are forming outside of formal marriage.  Neither of these scenarios is ideal.  The rate of divorce naturally increased in the twentieth century in part because divorces became easier to obtain, especially with the rise and success of the women's suffrage and rights movements.

The relative legal ease of acquiring a divorce, however, does not tell the full story.  Divorce also increased because of increasingly relaxed attitudes about marriage and family formation.  As the single working mother morphed from an object of sympathy into a perverse ideal--and as social signals and laws increasingly downplayed the importance of fathers and privileged mothers--both men and women came to see marriage as less of an institution and more of a formality.


"[Parents]... should make a good-faith effort to raise their children in a stable home, and to spare them the misery, confusion, and familial turmoil of divorce."


As several commenters noted, sometimes divorce is, sadly, the better option, such as when a spouse is abusive.  I suspect many such unfortunate unions take place precisely because we've come to take marriage (and love) so lightly.  The erosion of a broad, common set of cultural and religious values could also play a role, as more and more "oxen" are unevenly "yoked," creating deep tensions within relationships.

Of course, marriage is hugely complicated, and couples part way for many reasons (usually money).  However, it does seem that, absent abuse, infidelity, or criminality, couples with children should make a good-faith effort to raise their children in a stable home, and to spare them the misery, confusion, and familial turmoil of divorce. 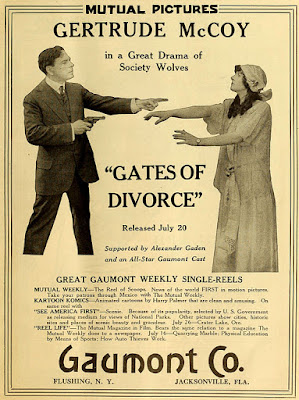 If your husband is pointing a gun at you, it's probably time to call it quits.  Otherwise, make the best of a bad situation.  At least you can still get 2 for $20 entrees at Chili's (tm).
(Image Source:  https://upload.wikimedia.org/wikipedia/commons/thumb/c/c7/Gates_of_Divorce.jpg/574px-Gates_of_Divorce.jpg)

Marriage, after all, is--or, at least, should be--a serious obligation entered into by two sober-minded adults with shared values and principles.  Of course, actual human relationships tend to be messy even in the most ideal of circumstances, but a proper focus on the point of marriage--two people coming together as one in the presence of God--would go a long way to help realign and heal struggling marriages.


"Marriage, after all, is... a serious obligation entered into by two sober-minded adults with shared values and principles."


- Sex Education:  One friend argued that we need more sex education in schools, as well as free birth control for young people to prevent unwanted pregnancies.  While I believe that abstinence is the best method of birth control to emphasize, I'm enough of a realist to know that teenagers find particular joy in doing what they're told not to do.

The problem I see is two-fold:  first, we already provide sex education in most public high schools throughout the United States; second, the call for more sex education and access to contraceptives merely demonstrate the crisis of the family I've noted.

The proper realm for sex education is the home.  The popular media has perpetuated the myth that parents don't talk to their children about the pitfalls of premarital sex because they're uncomfortable or prudish, so the schools have to do it to prevent millions of unplanned pregnancies.

The problem, rather, is that so many children are growing up in homes without proper parental guidance, they're missing out on important lessons about sex, marriage, and family.  Absent fathers aren't there to teach their children that it's wrong to get a woman pregnant and then to leave her.  Sex outside of the framework or expectation of marriage becomes devoid of any larger sense of responsibility.


"[S]o many children are growing up in homes without proper parental guidance, they're missing out on important lessons about sex, marriage, and family."


Therefore, teachers have had to take on yet another responsibility that should rest primarily, if not solely, with parents.  Add to this lack of parental involvement the glorification of sex in the media and the general "if-it-feels-good-do-it" philosophy of postmodern America, and you have a recipe for moral disaster.

It's unfortunate that schools have had to adopt this responsibility, at it suggests a massive decline in the understanding of what parents are supposed to do for their children.

To the point about free birth control in schools, I've never really understood this argument.  I understand that the logic goes, "it's worth taxpayers' money because it prevents the births of children who would become wards of the state; therefore, it's ultimately more cost-effective."  But many forms of birth control are incredibly cheap and readily available.  There's no compelling argument for why the government should force taxpayers to pay for a box of condoms for high school students.

As far as the birth control pill for girls, it's actually Republicans who want to make it available over-the-counter, which would further drive down the cost and allow young women experiencing shame or uncertainty to obtain it more easily.


Most importantly, providing birth control pills to minors through public schools introduces a host of sticky constitutional and legal concerns, the biggest being, "what if a family's faith forbids the use of contraceptives"?  A devout, traditional Catholic, for example, would no-doubt object to being forced to pay for birth control for his daughter and the daughters of strangers.  He would likewise experience a crisis being required to purchase condoms for his or others sons.

Just because most people--including, apparently, most Catholics--are morally comfortable using traditional birth control and contraceptive methods doesn't mean that we should make those who disagree pay for it.  The need to fund contraceptives becomes even less pressing when the low cost is considered.  Why cause an unnecessary, stressful crisis of faith for millions just to save a kid a quarter on a gas station rubber?

At this point, I would agree with my friend that, unfortunately, schools do have to take some role in sex education, especially given the increased likelihood children won't receive it at home, since the traditional family unit is on the decline.  If private non-profit organizations want to provide additional information or free contraceptives, no worries--there's no infringement upon religious liberty via official coercion.  Additionally, schools should stress the moral and financial obligations of parents to their children, especially in those communities where good role models are lacking.

Unfortunately, another government program to hand out free condoms is not a lasting solution to a problem that is one of the soul, not of the pocketbook.  Let civil society address these problems (perhaps with a revival of the good, old-fashioned shotgun wedding).

These are certainly thorny problems, and I fully recognize that as a single, never-married man I don't possess the same perspective as, say, a married couple of twenty years or a divorcee.  Nevertheless, I reject the notion that a lack of personal experience disqualifies one from the discussion (even while acknowledging that personal experience often provides a great deal of clarity).  Besides, I've witnessed first-hand the power of strong marriages and stable families.  Indeed, I'm the beneficiary of one such union.

Finally, I appreciate lively (and civil) feedback and discussion, and I look forward to expanding further on this topic on Wednesday.
Posted by The Portly Politico at 6:30 AM