Music is for Everyone

On the opening night of the 2016 Republican National Convention in Cleveland, Ohio, Republican presidential nominee Donald Trump made the grandest entrance in American political history (as far as I know):

Whether or not you love The Donald, hate his guts, or would rather watch reruns of The Celebrity Apprentice, surely we can all unite in acknowledging that his entrance was freaking amazing.  Heck, even The Washington Post thought it was cool.  I was watching alone in my not-so-portly bungalow and began hooping and hollering like a silver-backed gorilla.

Substantive?  No.  Reason to vote Trump-Pence this November?  Hardly.  An awesome display of pageantry?  Heck, yes.

The showman in me--I am, after all, an over-the-top indie musician with delusions of grandeur--had to share my elation with the world.  No thought can be left unsaid these days, so I took to Facebook. 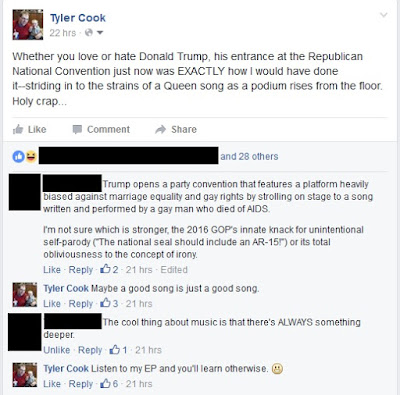 A bitter progressive rains on a parade before taxing and placing racial quotas on it.

TPP:  Whether you love or hate Donald Trump, his entrance at the Republican National Convention just now was EXACTLY how I would have done it--striding in to the strains of a Queen song as a podium rises from the floor. Holy crap...

Bitter Progressive:  Trump opens a party convention that features a platform heavily biased against marriage equality and gay rights by strolling on stage to a song written and performed by a gay man who died of AIDS.

I'm not sure which is stronger, the 2016 GOP's innate knack for unintentional self-parody ("The national seal should include an AR-15!") or its total obliviousness to the concept of irony.

BP:  The cool thing about music is that there's ALWAYS something deeper.

TPP:  Listen to my EP and you'll learn otherwise. :D

(Note how I cleverly defuse the bitterness with self-deprecating humor that also doubles as shameless promotion for my debut solo EP, Contest Winner EP, available now on iTunes, Google Play, Amazon, and elsewhere.)

For a post about a major political party's convention and controversial nominee, it was probably the least possible political statement I could make... except that, in our present age, everything is politicized.


"Tolerance isn't enough; bitter progressives demand total acceptance, even celebration, of whatever happens to be their cause-of-the-moment."


A quick aside:  I'm going to ignore the "unintentional self-parody" and the GOP's "total obliviousness to the concept of irony," except to ask the following:  how exactly is a political party supposed to acknowledge irony?  Do kill-joy progressives want Donald Trump to say, "Okay, okay, that was awesome, and I'm up here to introduce my wife, but first let me acknowledge that 'We Are the Champions' was written by a gay man, so let's take a moment to check our privilege and reconsider our platform's plank on same-sex marriage"?  I suspect that, even if he did, there'd be a slew of "too little, too late" articles on HuffPo the next day.

(And let me quickly take a moment to acknowledge the irony of writing a post lamenting excessive politicization on a blog that basically has "politics" in the name.)

So, let's unpack the first paragraph of Bitter Progressive's first post.  He complains that Trump entered to a Queen song, because the Republican Party platform supports traditional marriage, and Freddie Mercury was gay.  While BP intends this statement to be a slam at the GOP--and as a way of virtue-signalling his own support for gay rights--he essentially reduces a talented musician to one dimension, one personal trait.

I wish homosexual Americans all the best, but I, too, question the wisdom of same-sex marriage.  Does this mean I can't listen to and appreciate Queen, simply because Freddie Mercury happened to be gay?  By this logic, I shouldn't associate with gay people at all, nor should the roughly half of Americans who vote Republican.

Aren't we supposed to reach out to people--regardless of their sexual orientation--and treat them with respect, even if we disagree?  How does demanding an effective ban on music by gay artists for half the population help bridge that gap (and what are Log Cabin Republicans to do)?  How does it increase understanding and tolerance?

"None of [Freddie Mercury's] other qualities matter... until and unless they can be used as a convenient bludgeon to force conformity to the unforeseen priorities of a future age."

It doesn't, and that's not the point.  Tolerance isn't enough; bitter progressives demand total acceptance, even celebration, of whatever happens to be their cause-of-the-moment.

The logic of BP's post also dehumanizes Freddie Mercury (and, by extension, all gay men).  No more is he a phenomenal, groundbreaking singer and songwriter.  Instead, he's defined almost entirely based on who he likes to sleep with, and in turn, our anachronistic opinions about whether or not Mercury can formalize that sexual relationship in a legal forum is supposed to dictate whether or not we are allowed to enjoy his music.  None of his other qualities matter--being a man, having an awesome mustache, possessing an amazing voice--until and unless they can be used as a convenient bludgeon to force conformity to the unforeseen priorities of a future age.

Another pop culture example:  I disagree vehemently with pretty much everything Lady Gaga has ever said or done.  Her live concerts are like modern-day Dianic rituals to some pagan fertility goddess.  She prioritizes sexual libertinism over all else.  But, damn if I don't like "Bad Romance"--and even "Born This Way," an (inaccurate) anthem for the gay rights movement.  Should I not listen to her music because I disagree with her political and social views (there are other, better, aesthetic reasons to do so)?  If BP had his way, I suppose not.

A more useful, valid critique of Trump's epic entrance would point out the danger to a free republic of falling for grand pageantry... as a substitute for responsible self-government.

A more useful, valid critique of Trump's epic entrance would point out the danger to a free republic of falling for grand pageantry--"bread and circuses," as one of my colleagues put it--as a substitute for responsible self-government.  I'll admit that I loved every second of Trump's approach, but I'm not making an important voting decision based on a fifteen second stroll.  However, some people will love it too much, and make a decision based solely on pageantry.

Music should be for everyone to enjoy (songwriters should, of course, retain the rights to their works, but that's not the issue here).  If we want to build a productive civil society--one with disagreements, but common respect--we shouldn't criticize one group for enjoying a song because of an incidental personal characteristic of the songwriter.  Some of my best fans are liberals and progressives.  Should I be offended that they listen to "Hipster Girl Next Door" even if it describes their lifestyle-liberalism to a tee (surely some of them fail to recognize the irony)?  Should they shun me from their slam poetry readings and drum circles because I don't think the government should pay for urine-soaked "art"?

Of course not.  Let's grow up and just let a good song be a good song.  Maybe we'll learn something while singing together.
Posted by The Portly Politico at 6:30 AM