Republicans - Give Us Tax Cuts this Christmas

Despite some last-minute scrambling, it appears the Republicans in Congress might actually accomplish something this year and get a form of tax cuts passed.  While I don't like some parts of the proposed changes--particularly the insistence that the cuts be revenue-neutral, with mechanisms to trigger tax increases--cutting the corporate tax rate from 35% to 20-22% is worth the compromise.

The cut in the corporate rate alone will supercharge the economy, as companies relocate to (or stay in) the United States and begin employing more Americans.  Even if some Americans see a modest increase in their personal tax liability over time, the increased employment and wages from domestic investment and corporate expansion should offset most of the unpleasantness.

"[Cutting] the corporate [tax] rate... will supercharge the economy."


If I had my druthers, we'd have a slashed corporate and personal rate across all brackets, as well as the simplification of the brackets contained in the Republican plan.  With those reforms should also come substantial cuts to federal expenditures. 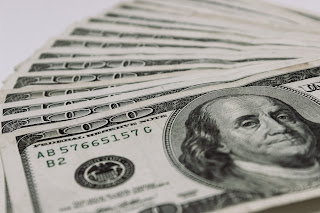 I've always wanted to fan a stack of these around.
(Source:  http://www.publicdomainpictures.net/view-image.php?image=223419&picture=money)

I'm an extreme budgeter, and and I strenuously disapprove of deficits.  I also suspect that the national debt and mandatory entitlement spending have grown so immense that it is increasingly difficult to grow ourselves out of the problem with tax cuts.  Nevertheless, I'm all for "starving the beast," and I'm willing to see spending cuts put aside for a time if it means slashing taxes.

Regardless, the current tax reform bill, while flawed, is good enough.  Just don't delay the cuts until 2019, as one version of the Senate's proposal suggested; that's just asking for a recession.

Make the cuts immediate effective 1 January 2018.  Then get to work on cutting federal expenditures--with an ax, not a scalpel.

For a more thorough dissection and defense of the tax bill, read Michael Barone's piece at National Review:  http://www.nationalreview.com/article/454240/republican-tax-bill-serious-reform
Posted by The Portly Politico at 11:30 AM No comments: