Since last summer, I've only made one post--my 2016 election guide--and I have definitely missed out on some major events.  I'd originally planned to write about the presidential election and its aftermath, covering the ups and downs of the process.  Unfortunately, teaching obligations--and, I'll admit, the unusually heated rhetoric of the campaign trail--kept me quiet during a very loud election.

I hate to confess it, but this election was the first time I didn't relish debating my progressive friends and colleagues.  The gulf in worldviews, as well as the overall rancor toward then-candidate Trump, dampened my enthusiasm for dialogue, debate, and discussion (that didn't stop me from wearing a bright red "TRUMP" hat to school the morning after the election, but that's a story for another time).  That might make me weak, but I opted to work quietly rather than talk to an ideological brick wall.  Apparently, millions of Americans did the same, and made their voices heard at the ballot box.

Regardless, here's a recap of (most) everything that's occurred since last summer:

(I don't know which is better--Trump winning, or Secretary Clinton losing--but I'm thrilled either way.)

- Donald J. Trump was inaugurated President of the United States.  I still feel like I'm living in a dream.

- Republicans maintained control of Congress (not that it's done much good, but we got Neil Gorsuch).

- Speaking of, President Trump--mmmm, it's soooo good to type that--nominated Neil Gorsuch, a constitutional originalist, to the Supreme Court.

- Insufferable Social Justice Warriors (SJWs) have lost a LOT of ground culturally, and globalist elites are gnashing their teeth.  I don't want to relish in Schadenfreude--and, honestly, the day-after-the-election reactions were so ridiculous, they took the fun out of good-natured ribbing--but it's refreshing to win one, especially when it seemed so unlikely.

(On the note of the culture wars, many more Americans--as well as some of the youngest Americans--are red-pilling; don't pop the bubbly yet, but radical feminism and post-modernism are taking a beating.  Here's a bit of my favorite kind of evidence--anecdotal:  while I witness some gender-bending, I overhear some conversations among students that lean heavily toward a traditional worldview.  Girls want to be treated like ladies and to be feminine; boys want to be men... in general.  One of my former students transformed from a Sandersnista into a Trumpster in less than a year; that's how rapidly the battle lines are shifting.)

- National conservatism took some lumps, however, in France (and, most recently, in Britain with Prime Minister Teresa May's humiliating showing in the special election), but Brexit rolls on (woo-hoo!). 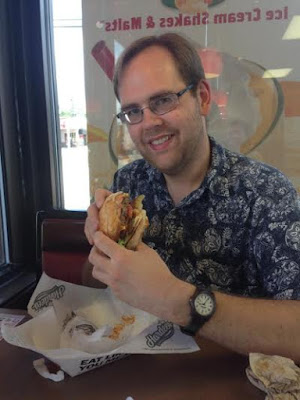 While history happened, I ate burgers in Hawaiian t-shirts.  Even this picture isn't new--but it is ALL-AMERICAN.  Make Lunch Great Again!

- The Left has continued to persecute the Trump Administration, but he keeps winning (maybe not legislatively, but he slayed incompetent FBI Director James Comey, and he's all but beaten the increasingly desperate claims that he colluded with the Russians).  It feels like we're living through the Nixon era again (but that's not a bad thing--it's Pat Buchanan's America, baby).

- Our constitutional system faces a major threat from the "deep state"--the "swamp" of Trump's campaign rhetoric, coupled with the powerful intelligence agencies that influence (control?) the government outside of constitutional and democratic accountability.  That's a terrifying topic for a future post.

- The future of conservatism is up in the air, but it is probably due for an update.  We've ignored the working class for too long.  Nixon won a landslide in 1972 reaching out to the Silent Majority.  Trump played the exact same playbook and had a 1968 outcome.  If he can weather the Left's storm--and if they continue to radicalize leftward--2020 might be a repeat of 1972 (except that the country is far more divided in its worldview now).  2016 demonstrated that Americans were fed up with eight years of a progressive administration that kept spiking the football after every political and cultural victory.

Naturally, I've got a lot of catching up to do.  Here's my vision for the future of The Portly Politico:

- A new platform.  I've enjoyed using Blogger, but I've hit a wall with the features I'd like to implement.  In the near future, I'll be moving to a new website, and will maintain this page as an archive for older essays.

- Short posts.  In the meantime, I'll be making short posts to the existing Blogger site.  These posts won't be as long as my output from Summer 2016, but they'll offer quick commentary on current events.

- eBooks.  I'm working on an eBook about the importance of social and cultural conservatism.  I'm also planning a series of books on great historic leaders, drawing lessons from their lives that are applicable to morality, ethics, and politics today.

- Public speaking.  Especially after the eBook launches, I hope to book talks with local groups.  I've already worked up two good talks, one a reassessment of Samuel Huntington's "A Clash of Civilizations?," the other a general overview of contract theory.  Exciting stuff.

- American Patriot Radio (www.patriotic-radio.com).  I've been associated with the good folks at APR for a few years now.  I'm also a guest contributor, and I've linked to some of my pieces there throughout this post.  My hope is that I'll contribute a few shorter pieces there a few times a week, and I'll provide links from my new site when it launches.  In the meantime, you can check out submissions from various writers here.

That's just a sampling of what's to come.  What would you like to see from the TPP?  What's your take on the past seven months?  How's Trump doing?  Leave an angry comment below and let me know!
Posted by The Portly Politico at 6:00 AM No comments: