It appears that Donald Trump has selected Mike Pence, Governor of Indiana, as his running mate.  Pence is a solid social conservative who may help assuage the fears of movement conservatives about Trump's policies.  While I'm disappointed that my science-fiction-loving, history-writing, jowl-shaking favorite, former Speaker of the House Newt Gingrich, didn't make the cut, Pence was a strong choice, especially against more questionable figures like New Jersey Governor Chris Christie (too much like Trump, not conservative enough) or Iowa Senator Joni Ernst (too inexperienced, not enough name recognition).  He'll bring a sense of stability and experience to the ticket, even if he lacks Newt's erudition and pizzazz.

So now we turn our attention to Hillary Clinton's vice presidential search.  Secretary Clinton indicated that she would wait to make an official selection after Trump's decision was finalized; with the Democratic National Convention in Philadelphia just a little over a week away, look for her to make a decision soon (possibly during the Republican National Convention next week in Cleveland).

I'm not as steeped in Democratic Party politics to the same extent as the Republican Party, and even there I'm mostly wading in the shallow end of the pool.  That being said, the Democrats seem to be experiencing the same internal power struggle as the Republican Party.  Just as the Republican Party consists of various factions (broadly falling into the "establishment" and Tea Party sections, and now with a new Trumpist element, although the real breakdown is far more complicated than these categories), the Democrats increasingly seem divided between Clinton-style corporatism--a cozy relationship between government and certain key firms--and social progressivism and economic socialism.


The latter group gained a powerful voice in the form of (formerly Independent) Vermont Senator Bernie Sanders, a self-described democratic socialist, who went from polling around 4% last summer to losing only narrowly to Clinton in the Democratic primaries in June.  Massachusetts Senator Elizabeth Warren also represents this aggressive, progressive, economic populist wing of the Democratic Party, and both Sanders and Warren have had Clinton running further to the left than normal.

Unlike Republicans, though, national Democrats exercise amazing party unity, and once a nominee is selected, they tend to stick doggedly to their party's pick.  This discipline applies, at least, to elected officials; voters, of course, often don't demonstrate the same degree of party loyalty.  For example, there is the so-called "Bernie or Bust" group (much like the #NeverTrump and #NeverHillary crowds), some of whom are breaking for Trump over Hillary.  However, I expect most Democratic voters will "hold their noses" and vote for Clinton, just as many Republicans will do for Trump.


"[Hillary Clinton] is the living embodiment of the Washington elite and insider establishment."


Much like Trump, then, a lackluster Clinton campaign potentially has much to gain from a prudent VP pick.  Whereas an unscripted, shoot-from-the-hip Trump was probably wise to pick a more established, reliable, mildly boring figure (as Dinesh D'Souza said on Sean Hannity's radio show Thursday, Trump went for "white bread" over the spicier Gingrich), Clinton may benefit from an unconventional running mate.  She is the living embodiment of the Washington elite and insider establishment, having lived in a cossetted world of taxpayer-funded luxury for most of her adult life.  A scrappy outsider could be her best bet, and could throw some red meat to the Democratic Party's increasingly progressive base.

On the other hand, Clinton may want to double down on her establishment bona fides, making the argument that her campaign is the "serious" one that will maintain the status quo and incrementally advance progressive pet projects like a higher minimum wage and "free" college (among other taxpayer-funded goodies). 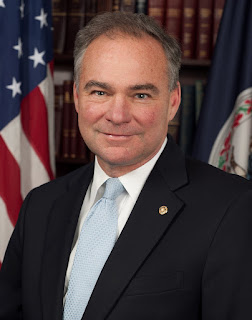 So, who are Clinton's potential nominees?  Here's a list, pulled from this article at CNN.com:

Most of the reading I've done (and, admittedly, it's not much) indicates that Tim Kaine is the likely choice.  He certainly seems to be the safe choice--he's generally inoffensive, experienced, and bilingual--but that might not be the best move for Clinton.  While the CNN article linked above indicates that the Democratic base isn't as important this time around, that assumption is premised on Bernie Sanders's endorsement.  It appears that endorsement was fairly hollow, if consistent with the Democratic Party's strong party discipline.

What about a Clinton-Warren ticket?  Clinton could double down on the "historic first" aspect of her campaign--pretty much her only real selling point--saying, "why not elect the first female Vice President, too"?  But how much would that benefit her, really?  It would neutralize a potentially powerful opponent to Clinton's left, and Warren has a demonstrated ability to fire up crowds, but her fiery, socialistic rhetoric ("you didn't build that") could hurt Clinton with moderate voters.

At one point there was quite a bit of buzz around Julian Castro and his brother, both of whom seemed to be Hispanic Obamas--young, dynamic, ethnic, hip--but that possibility appears unlikely.  Indeed, most of the rest of the names on this list appear to be cabinet members in a Clinton administration, but not running mates (except possibly Tom Vilsack).

"...Washington, D.C., has awarded its three electoral votes to the Democratic candidate in every presidential election since it could first vote in 1964:  the bureaucrats want to keep their jobs."

It's unwise, however, to underestimate the power of identity politics to the Democratic Party.  While the Republican Party is historically made up of three factions--national security conservatives, social conservatives, and economic conservatives--the Democratic Party is a vast hodge-podge of clients looking to government to serve as their patron.  This phenomenon explains why Washington, D.C., has awarded its three electoral votes to the Democratic candidate in every presidential election since it could first vote in 1964:  the bureaucrats want to keep their jobs.

With so many clients--and with the odious racial balkanization pushed by far left groups like Black Lives Matter, et. al.--any Democratic administration and presidential ticket has to perform a delicate balancing act of patronage to appease the myriad factions demanding a seat at the table.  Clinton's VP pick will be a part of that broader calculation.

Who do I think Clinton will pick?  I have no idea.  I've heard talk of a Clinton-Sanders reconciliation ticket, but that strains credulity.  I get the impression the two can barely stand each other, and Clinton needs someone younger to step into the presidency in the event that her health problems worsen.  An elderly, bitter socialist is probably not the best person to have one heartbeat away from the presidency.

Tim Kaine does seem like the kind of blandly conformist, minimally inoffensive pick Clinton would make.  More importantly, he doesn't threaten her in any way, and she could safely ignore him for four or eight years.  I don't think she'd have that luxury with Elizabeth Warren.  I also suspect that Warren has her eyes on the White House herself, and might hold back for a run in 2020 in the event of a Trump victory.

Regardless, I can guarantee that Clinton's pick will be calculated and focus-grouped to nth degree to benefit her electoral prospects as much as possible.  For Republicans, let's hope Mike Pence takes debating lessons from Newt Gingrich before the Vice Presidential Debate this autumn.
Posted by The Portly Politico at 6:30 AM