Reflections on a Summer of Portliness

I'd like to thank everyone who has read and supported The Portly Politico for the past couple of months.  I've been very pleased with the overall response, and I love the engaging questions, comments, and personal attacks I've received.

Because the school year resumes this week--and my blissful summer break draws to a close--I will be slowing down the rate of output to one piece per week, probably to be released Monday mornings at 6:30 AM.  While I would love to maintain the Monday-Wednesday-Friday releases, I've taught long enough to know that keeping up that pace would be detrimental to the quality of the posts (and probably to my teaching, which keeps the lights on).

As such, I'd like to dedicate today's post to looking back on the summer, and to share some insights into how I put this thing together. 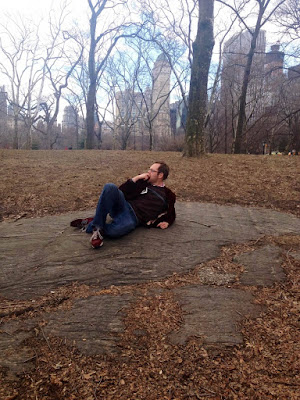 The Author in Repose.
(Original image c/o The Portly Politico)

- The Process:  When I relaunched this blog in early June--after six years without a single post--I figured I'd keep it up for a few weeks before cutting back on the frequency of posts.  After those first couple of weeks, though, I was hooked, and became committed to sticking to a regular, three-posts-a-week schedule.

It was not always easy (although, to be honest, how hard is it really to sit at a keyboard and write?).  As so often happens, my best-laid plans to have two or three pieces on file at any time quickly went astray. Just like the college history major I used to be, I found myself writing most of this summer's posts at around the same time as this one:  9 PM the night before the 6:30 AM release.  Some were written at more sensible hours (which my body, tired after long hours at my summer job as a facilities maintenance man, appreciated); Sunday afternoons often saw me writing a post for Monday.


"Deadlines... inspire.... a due date--even a self-inflicted one--is a surefire cure for writer's block."


Most of the posts took about two hours to write and edit, though some took longer.  My process usually goes something like this:  the day I needed to write a post, I'd start brainstorming ideas (if I didn't already have one in my head).  Once I hit upon a topic, I'd begin "writing" it in my head--pretty much how I've always written, going back to school--and then sit down in the evening to hammer it out.  If I'd had trouble dreaming up a topic, I'd scan The Drudge Report for headlines, hoping to find some inspiration.  Many of my posts were adapted from lectures given in the AP US History, AP Comparative Government, and US Government classes I teach during my day job.

Current events, of course, fueled the output, though I tried to avoid particularly controversial or complicated issues when they first broke.  My general policy for this blog and for political discussions is to withhold judgment until all (or most) of the facts are in, especially in the case of shootings.  That's why I never wrote about any of the various shootings that occurred over the summer, whether by or of a police officer.

Deadlines, however, inspire, and I always managed to come up with something.  It's amazing how a due date--even a self-inflicted one--is a surefire cure for writer's block.

I also required myself to post a link to every piece on Facebook, both to attract readers and to force myself to address criticisms (and, in some cases, to face attacks).  It certainly helped sharpen my thinking, and clarified the importance of citing sources frequently!

- Tough Times:  The most discouraging moment of the summer occurred while writing my "Life after Brexit" piece.  I'd had a long day and spent a very long time hammering out that piece (a good bit of which--probably for the better--was wrong), and had actually completed the post.  I was about to go to bed, but I had finished reading an op-ed National Front leader Marine Le Pen wrote to The New York Times, and wanted to include a quotation.  Somehow--and, despite my basic level of computer savvy, I don't know how--I managed to delete the entire post.

That was the closest I came to calling it quits for the night and posting a lame apology the next morning.  I rallied, however, and finally got into bed after 1 AM.  Needless to say, the next morning was not fun, but I'd stuck to my self-imposed deadlines.

The other more amusing moment was the response to "Music is for Everyone," a relatively non-controversial premise.  Someone posted a rather snarky, ridiculous commentary on a very innocuous Facebook post I made; I (against my better judgment) responded with the post linked above.  Needless to say, this nasty fellow did not take kindly to be calling out (though I suspect now it was exactly what he wanted).


"It's been a tough century for conservatives, and we needed a win.  Brexit was a major victory...."


While it was all a bit blown out of proportion, I couldn't let a vile bully go unchallenged.  Mockery is a powerful weapon against normalcy and decency; no one wants to look foolish, so no one attempts a defense.  This minor issue probably wasn't the hill to die on, but at this point, if we can't all enjoy cultural products without fear of being "appropriative" or because we don't share the artist's political beliefs, what kind of society can we hope to have?  Either one of total conformity, or none at all.

- Fun Times:  While some of my posts performed dismally, it was fun to see which posts were well-received.  I was particularly surprised that the "Family Matters" series was so popular.  To date, the initial post is the most-viewed post of all time, finally eclipsing (fairly substantially) the first true comeback post, "American Values, American Nationalism."  Apparently, many people were eager to read about the decline of the two-parent nuclear family.  Those posts generated a LOT of discussion, too, and it was interesting to read some of the comments about divorce, particularly from those who have been through it.  Many of the comments essentially acknowledged that there are exception, but that most of the time, the two-parent nuclear family is the best way to run a family.

- Brexit:  Speaking of fun times, I had a blast writing about Brexit.  It's been a tough century for conservatives, and we needed a win.  Brexit was a major victory for nationalism and sovereignty against totalizing globalism.  The predicted economic catastrophe didn't happen (and I even thought it would--I argued it was a price worth paying for independence); in fact, the stock market is reaching new heights.  We certainly haven't seen the last of the potential fallout, but I was thrilled to cover such an historic event on this humble blog.

- Monetization Denied:  Full disclosure:  one sinister reason for starting this blog was to help generate a little extra cash; after all, I'm a capitalist.  For some reason, though, my AdSense application keeps getting dinged for "insufficient content"--a laughable proposition.  Even though your sweet, sweet ad dollars didn't start rolling in, I still enjoyed the challenge and the intellectual workout of putting these posts out there.  And if you ever want me to come speak at your organization, please shoot me an e-mail at tjcook.history@gmail.com.


What happens to a dream deferred?  Does it shrivel up like a raisin in the sun?  Or does it ask for your donation to keep quality content alive and well?

- eBook:  While I won't have as much time to write new material, I plan on taking some of these posts and adapting them into one or two short eBooks.  I've already decided to take my "Family Matters" series and turn into a larger defense of social conservatism and tradition.  I'm also hoping to put together an election guide for the 2016 presidential election, with detailed information on the major and minor party candidates.  Stay tuned for more details; I recommend signing up at the top of the page to receive e-mail updates.

Well, that's enough navel-gazing for one day.  Thanks again for your support.  It's been a wonderful summer.  See you next week!
Posted by The Portly Politico at 6:30 AM