Family Matters Follow-Up Part II: The Welfare State and the Crisis of the Family

My series of posts on the decline of the traditional family unit in the United States and the West has generated a great deal of discussion (and, occasionally, some bitter recriminations).  Thus, after the overwhelming feedback and requests for clarification I received to "Family Matters," I decided to expand upon some portions of that piece (click here to read "Follow-Up Part I" about divorce and sex education).

One of the claims of "Family Matters" concerned the "havoc" President Lyndon Johnson's Great Society/War on Poverty wreaked on the black American families.  In the original post, I failed to link to any data or articles to substantiate this claim, but I've since updated the post with links to Daniel Patrick Moynihan's famous "Moynihan Report" (actual title:  The Negro Family:  The Case for National Action) and a piece from 2015 that summarizes some of the main points of the report.

You haven't even made it to the real introduction and I'm already hitting you up for money. Support quality content with your donation today!


The late Daniel Patrick Moynihan--who would go on to serve as US Ambassador to India and the United Nations, then as a Democratic Senator for New York--enjoys a rare respect as a liberal among conservatives.  Though he was a leftist on many issues, he was first and foremost a scholar with a commitment to following the data wherever it took him.

The so-called "Moynihan Report"--which he wrote while working as a bureaucrat in the Department of Labor in 1965--demonstrated that many of the problems of the black community were caused only in part by discrimination, but much more so by a decline in marriage and stable family formation.  While racial discrimination was (and--I would like to think to a lesser extent--still is) a major problem in the 1960s, it alone could not explain adequately the plight of many black Americans.

Instead, what Moynihan discovered was that well-intentioned government programs inadvertently subsidized single motherhood, and were destroying the black family.  Indeed, the "national action" for which Moynihan called was that which would reinforce "the establishment of a stable Negro family structure."  This national goal would be "difficult," but "it almost certainly offers the only possibility of resolving in our time what is, after all, the nation's oldest, and most instransigent, and now its most dangerous social problem."  (Moynihan, The Negro Family) 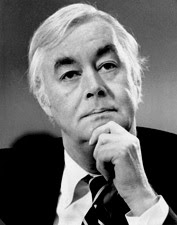 I once heard a conservative black gentleman from Darlington, South Carolina, summarize Moynihan's argument thus:  at a time when black men faced legitimate discrimination in the workforce, and could lose their jobs on the flimsiest of pretexts, the federal government came along offering generous support to single mothers.  By 1975--ten years after Moynihan's prophetic report--a head of household would have to earn $88,000 (in 2015 dollars; about $22,000 in 1975) to out-earn the benefit from the federal government.  (Jack Coleman, "Juan Williams:  Daniel Patrick Moynihan 'Had it Right' About Breakdown of the Black Family")  As Jason Riley, author of Please Stop Helping Us:  How Liberals Make it Harder for Blacks to Succeed wrote in a 2015 op-ed in The Wall Street Journal, "In effect, the government paid mothers to keep fathers out of the home--and paid them well."

Not surprisingly, many women took note of this benefit.  Some of them--and, yes, I know what you're about to read will be hard to believe, but it actually happened--calculated that they were better off divorcing their husbands or having a child out of wedlock, especially given the real, costly discrimination their husbands faced.  Government do-gooding, coupled with a legacy of racial discrimination, caused many young black children to grow up without fathers.

Initially, that might not have been a huge problem... but it metastasized.  Young boys grew up without father figures to shape them, and came to expect that leaving a woman, or having children with multiple women, was natural.  Young girls grew up thinking they had no reasonable expectation of their man sticking around.  With each generation, the problem grew worse and worse, until now roughly 72-73% of black children born in America are born to a single parent.


"[S]imply replacing one parent with a paycheck does not fulfill a child's many needs."


Single parenthood is sometimes the only option, but it's a tough row to hoe.  Not only does it place financial burdens on the parent; it also removes from her or him the ability to parent a child adequately.  To quote economist Walter Williams at length:


"Whether a student is black, white, orange or polka-dot and whether he's poor or rich, there are some minimum requirements that must be met in order for him to do well in school. Someone must make the student do his homework. Someone must see to it that he gets eight to nine hours of sleep. Someone has to fix him a wholesome breakfast and ensure that he gets to school on time and respects and obeys teachers.

"Here's my question: Which one of those basic requirements can be accomplished through a presidential executive order, a congressional mandate or the edict of a mayor, a superintendent of schools or a teacher? If those basic requirements aren't met, whatever else that is done in the name of education is for naught." (emphasis added; Walter Williams, "Can Racial Discrimination Explain Much?")

In other words, simply replacing one parent with a paycheck does not fulfill a child's many needs.  Children born out-of-wedlock and raised by a single parent are more likely "to experience a variety of cognitive, emotional, and behavioral problems," according to Dr. Paul Amato in "The Impact of Family Formation Change on the Cognitive, Social, and Emotional Well-Being of the Next Generation."   That creates ripple effects for generations to come, and the cycle is difficult to break.

The problem was prevalent even before Moynihan wrote his report (which, not surprisingly, caused many of his fellow-liberals to accuse him of "racism" and bigotry--common tactics when faced with an unpleasant truth).  Ronald Reagan, while campaigning for Arizona Senator and Republican presidential candidate Barry Goldwater in 1964, told the story in his magisterial "A Time for Choosing" speech of a mother who divorced her husband to get a check from the government, and how she learned to do it after talking to two other women who'd also gamed the system.

We've now had fifty-one years of the Great Society, and while some of its programs helped alleviate malnutrition and other problems that are, thankfully, dwindling issues, its good intentions created a host of other problems.  In 1965, one could still plausibly claim that government do-gooders merely didn't know any better.  Now, the argument seems to be, "Well, we're trying to do the right thing, so that's all that should matter."  That's prime paving stone for the road to hell.


"The decline of the family is a problem all Americans will have to address."


Moynihan argued that black Americans in particular were experiencing the decline of family formation most heavily because of the "tangle of pathologies" stemming from centuries of slavery and a century of legal, social, and economic segregation, and that this legacy dovetailed disastrously with the perverse incentive toward divorce and single motherhood.  As he predicted, this tangle morphed into a multi-generational cycle that has ground many black Americans further into poverty.

In 2016, the negative consequences have not only magnified the problem among black Americans; it's spread throughout American society.  There's been a crisis among black families for fifty years; we ignored it at our peril.

The experience of black American families since the 1960s is a sad story, though there are many brave black mothers and fathers who raise their children with love and support.  They are struggling to break a dangerous cycle, one that swirls in a murky stew of cultural, social, and economic pressures against the two-parent family and traditional marriage.

Racism appears to have enhanced the deleterious effects of the welfare state in the case of black families, but now those negative consequences are increasingly color-blind.  The decline of the family is a problem all Americans will have to address.

(For additional reading, check out the works of Walter Williams, a brilliant economist and political conservative who, as it happens, is black.  Start here for an appetizer:  http://www.washingtonexaminer.com/can-racial-discrimination-explain-much/article/2556814; after that, get Race and Economics:  How Much Can Be Blamed on Discrimination?)