There is No General Will

I've been watching the television series Wayward Pines (don't worry; no spoilers), which raises tons of great questions about how a society--particularly a closed one under duress--should function.  What's the proper balance between freedom and security?  How much should governing elites reveal to the folks, and what should be concealed?  Should people fulfill specific roles in a society to benefit the greater goals of that society, or should they be free to choose their professions (and, for that matter, their mates, homes, schools, etc.)?

These are interesting and complicated questions.  Indeed, the question of the proper balance between freedom and security has puzzled republics since Periclean Athens.  The question itself is misleading, I would argue--and likely will in a future post--that the two are not mutually exclusive.


"[T]here is no such thing as the general will."


But I digress.  All of these questions seem to pose a larger one:  what is the "general will" or "greater good" of a society, and how should a society go about pursuing it?  My answer is that there is no such thing as the general will.

Now, to be clear, this statement does not mean that I think there's no merit in a society pursuing some common goals, or that I deny that sometimes in a majoritarian system there will be policies that some people don't like, but that are beneficial for society as a whole.  Our whole constitutional system in the United States is carefully balanced to make sure that the "will of the people" is well-represented at the local, State, and national levels, while still guaranteeing and protecting the basic rights of individuals--even when those rights aren't particularly popular.

But here's the rub--while our constitutional order protects against the tyranny of the majority, the broad notion--from French philosopher Jean-Jacques Rousseau--of the "general will" acknowledges no such limiting principle against the power of the majority.  It is against this sense that the "will of the people" is the be-all, end-all of social good that I stand. 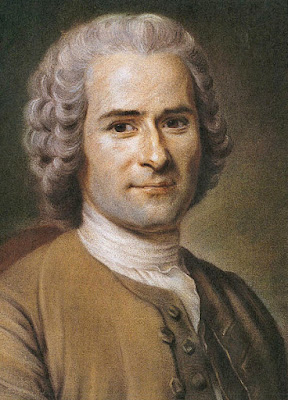 
The people, as a whole, are fickle.  It's very difficult to get ten people to agree about what to eat for dinner; note how difficult it is for 330 million to agree on even the most basic of issues (in South Carolina, we still haven't reached any kind of consensus about how to pay for and fix our roads, something virtually everyone wants done).

Even if you can get ten reasonable people to agree to, say, a long-term weekly dining schedule, at some point one or two will start to say, "Well, maybe we could have spaghetti on Wednesday nights instead of tacos."  Imagine that conversation happening loudly and angrily across fifty States.  It's a recipe--pardon the pun--for disaster.

Raw majoritarianism--what Rousseau appears to be calling for when he argues that society should be based on the "general will" of the people--is an unworkable scheme on anything but the smallest levels of society.  Rousseau's chilling dictum that men are "forced to be free" reveals the inevitable consequence of unbridled democracy:  ultimately, the inexpressible "general will" becomes expressed through a demagogic tyrant, or through a legislator uninhibited by any restraints on its law-making authority beyond what the people want.

"[T]he 'general will' acknowledges no... limiting principle against the power of the majority."


I've long viewed Rousseau as one of the great villains of modern philosophy, and I would argue that one can draw a more-or-less straight line from Rousseau and the French Revolution through fascism, communism, and totalitarianism, all the way to modern illiberal progressivism.  Rousseau--like modern progressives--believes in the mutability of human will, arguing that laws, not human nature, make people bad or good.  Get the laws right--or tweak the system enough--and you can spit out completely virtuous people.

Thus we see the conceit of the modern Left that no one commits crime out of greed or evil; instead, they're "victims of circumstance" or subject to "systems of oppression" that cause them to do evil.  If only we created more programs or redistributed more wealth--or, if taken to the logical extreme, if only we did away with private property altogether, since the state and its laws exist to protect it--then, finally, man would be perfect.

Such notions are not only absurd; they are hugely injurious to both individual freedom and the health of society at large.  A virtuous society is one that cultivates a virtuous culture, which is only sustainable if it educates its people to live virtuously, recognizing that there will always be failures because, after all, to err is human.

(Note:  I do acknowledge that sometimes people are driven to commit typically immoral deeds out of necessity; however, I believe our society hugely exaggerates the extent to which such motives drive criminality and wickedness; just ask any wealthy person who's ever been convicted of shoplifting or embezzlement why they stole, and you'll quickly realize that even people with plenty of material safety are tempted to sin.)


"Raw majoritarianism... is an unworkable scheme...."

Expecting pure perfection is dangerous and unrealistic.  Mistakes are the inevitable price of freedom.  You can ignore reality for a time and get by with it, but eventually it will catch up.

Rather than idealistically seek after a non-existent "general will," we should instead govern ourselves--and resist tyranny in the process.  To do so requires decentralization of power (and more local decision-making), a shared understanding of American values, and an education rich in morality, virtue, and philosophy.

(To read more about Rousseau's thought--and, perhaps, to correct my errors and oversimplifications, read more at http://plato.stanford.edu/entries/rousseau/.)
Posted by The Portly Politico at 6:30 AM