Brexit: It's Now or Never

Tomorrow--23 June 2016--the people of Great Britain will make an important decision:  to either "Remain" in the European Union, or to boldly "Leave," and seize back their national sovereignty.  Should they vote for the former, they will never again have the opportunity to regain the latter.

As I detailed in a post from 13 June, "Brexit:  The Antidote to Supranational Tyranny," Brexit is the best option for Great Britain.  I laid out a number of arguments as to why I believe this is the case, chief among them being that this vote is about national sovereignty more than anything else.  Today, I'd like to expand upon that point.

There are many compelling arguments for why Britain should vote to "Remain."  Many argue (and I think they are correct) that voting to "Leave" will cause economic upheaval and a dampening of markets.  Others argue that European Union offers a collective bulwark against Russian expansionism.  Related to those arguments is a third, namely that Britain is now so intertwined with Europe, that neither can truly divorce the other.

First, voting "Leave" will almost certainly cause some turmoil in international and domestic markets.  Why?  Because investors crave stability.  But in light of freedom from an increasingly tyrannical, centralist, and bureaucratic European Union, Britain will very quickly recover economically, as will the world.  Once investors and analysts realize that Brexit isn't the end of the world--and once Britons are freed from the EU's onerous regulations and redistributive schemes--the British economy will flourish.

Currently, the European Union is experiencing zero percent--let me write that again--zero percent--economic growth (Source:  Douglas Murray's excellent essay--"Exit Britain?"--from the 13 June 2016 issue of National Review, Volume LXVIII, No. 10).  Why should the British stay in an organization run by recklessly humanitarian Germans that props up profligate Greeks and unemployed Spanish teenagers?  The short-term negative economic impact would be well worth Britain's long-term economic prosperity and, more importantly, national sovereignty.

Unless Europe callously blocked British trade--something it can ill-afford to do--and the United States dragged its feet on a bilateral trade agreement, Britain would bounce back quickly.  There is no excuse for the latter, despite President Obama's threat to send Britain to "the back of the queue," but the former would be unsurprising.  The engineers of the European Union seek "ever closer union," which in their twisted take on federalism translates to "ever greater control."  However, even Brussels seems prudent enough to avoid a trade war with one of the largest economies in the world.

Why should the British stay in an organization run by recklessly humanitarian Germans that props up profligate Greeks and unemployed Spanish teenagers?


The second major pro-Europe argument revolves around defense.  Russia under Vladimir Putin represents a real threat to Europe, especially to the old Soviet satellite states in Eastern Europe.  However, Britain's exit from the European Union would seem to have little impact, at least in the long-term, on how to approach this problem.  Putin will still be there on the 24th regardless of how Britons vote on the 23rd, and Europe would be "biting off its nose to spite its face" if it didn't continue to work with Britain as a part of the North Atlantic Treaty Organization (NATO).

The whole "Remain" argument seems to rest on the premise that Brexit would destroy NATO.  This argument melts away under the slightest of scrutiny.  The United States and Turkey are both NATO allies, but not part of the European Union.  The NATO alliance can still work whether Britain is in the EU or not.

Additionally, the silver-lining to a possible Brexit vote--and to Putin's incessant saber-rattling--is that European nations are finally picking up their share of the tab for their defense.  In some ways, the fecklessness of American foreign policy has done a great deal to strengthen militaries across Europe.  I would wager Brexit would continue this trend, which might help some of the Continent's more spend-thrift nations get their fiscal houses in order.

The third point--the meshing of Britain with Europe--is the stickiest of all, but that's ultimately a technical and diplomatic problem that can be resolved.  Besides, what has this intertwining given Britain?  Unsustainable, exploding immigrant populations?  Soldiers and shopkeepers beheaded by Islamist radicals?  As I pointed out last week, Britain should praise God and Margaret Thatcher that it stuck to the pound sterling.

Regardless, it's foolish to think that Britain will simply stop interacting with Europe.  Again, any substantial block to a fruitful economic and diplomatic relationship between Britain and Europe would come from a vindictive European Union.  Even then, elites in the EU and Britain would quickly work out how to keep business going between the British Isles and the Continent. 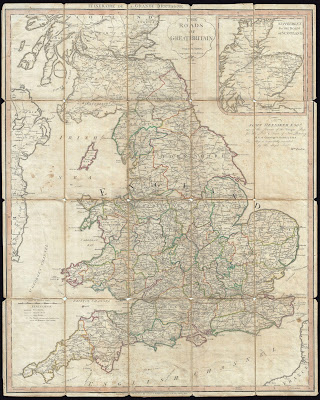 How could so much freedom emanate from one little island?
(Source:  https://upload.wikimedia.org/wikipedia/commons/8/81/1790_Faden_Map_of_the_Roads_of_Great_Britain_or_England_-_Geographicus_-_England-faden-1790.jpg)

Historically, Britain has always stood apart from the rest of the Continent.  Trying to force upon it the label (and reality) of being "European"--something it assiduously avoided for hundreds of years--flies in the face of British character and values.  Those values place a premium on rule of law and representative government.  Since the Magna Carta of 1215, the people of England have held their ever-widening rights and freedoms dear.  It would be a shame to see the crucible of so much liberty succumb to the glossy seductions of cosmopolitan tyrants.

Instead, 801 years later, let us have a New Magna Carta, a new birth of liberty and sovereignty.  Once again, I would urge my friends in Britain to vote "Leave" tomorrow.  Yes, it will lead to short-term uncertainty.  Yes, the road ahead is unclear.  In the final estimation, however, liberty is always full of questions, but it is well worth the price.  In the case of Brexit, no other consideration matters.

Posted by The Portly Politico at 6:30 AM