On Friday, I dashed off some reflections about the office of the Vice President, and promised a run-down of those on Donald Trump's alleged "short list" of potential running mates.  Today, I offer up my take on these possible picks, and offer up some predictions.

Here are the candidates I will explore today:

1.) New Jersey Governor Chris Christie - Christie was the first major Republican presidential candidate to endorse Trump after suspending his own campaign shortly after the New Hampshire primary.  As a conservative, I've always had mixed feelings about Christie:  I know I shouldn't like him, but I do.  In his exchange with Kentucky Senator Rand Paul in the first GOP debate last fall, I thought Christie came off looking like a responsible adult concerned with national security, while Paul appeared petulant and childish.  My libertarian readers will disagree with this assessment vehemently, and Christie's style might not sit well with some, but I think Christie won that exchange, and was very effective in addressing the American people, not just his opponents on stage.

Nevertheless, I would argue that a Trump-Christie ticket would be doubling down on too much New Yorker/New Jerseyite brashness.  Christie failed as a candidate because Trump stole his thunder.  There were two loud, brassy Northeasterners on stage, and Trump was the more entertaining and, for many voters, compelling of the two.  Christie would certainly bring strong prosecutorial chops to a debate--and a Trump administration--but such a heavily Northeastern ticket could turn off conservatives who might be wary of a Trump presidency as it is.

Here's a piece arguing that Christie should be the VP:  http://www.cbsnews.com/news/chris-christie-donald-trumps-best-choice-for-veep/

2.) Arkansas Senator Tom Cotton - I don't know much about Cotton, although I did hear him speak at the 2016 Silver Elephant Banquet (no, it's not a Republican strip club--it's the annual fundraising dinner for the South Carolina GOP).  I had to slip out early, but I was not too terribly impressed.  What he lacked in on-stage chutzpah, however, he makes up for with a strong, attractive background:  admirable military service, a tenacity in Congress, and youthful energy.  Cotton would appear to fulfill for Trump what Paul Ryan was to Mitt Romney:  a young, dynamic, wonky guy who could eagerly assist his older commander-in-chief.


3.) Iowa Senator Joni Ernst - Similarly, I don't know much about Ernst, so I can't say much.  Like Cotton, she's a rising star in the GOP.  Her primary appeal seems to be that she's a woman.  To be clear, I abhor identity politics--no one should ever vote for a person simply because that person is a certain race or gender--but I've heard the argument that "Trump struggles with women, so he needs a woman VP to show he's not a cad."

Political pundit Dick Morris has made this case for months (he pushed for New Mexico Governor Susana Martinez as a VP pick before Trump dissed her), and it's an interesting approach:  essentially, Trump's VP would be part of a public political "marriage," and Trump would show women voters that he does treat women well, by doing so with his female running mate (in this case, Ernst).

That might not be too flattering to women--who strongly favor Hillary Clinton over The Donald--but there is some wisdom to it; after all, most voters (not just women!) vote for emotional, rather than rational, reasons.  If the ploy worked, it could help Trump shore up his numbers among the fairer sex.

But what of Joni Ernst herself?  She's only been in the Senate two years; before that, she served a brief stint in the Iowa State Senate and as auditor for her home county in Iowa.  All that being said, her Senate run in 2014 was ingenious, and she's a huge star in some quarters of the conservative movement.  Like Cotton, she has an admirable record of military service (she's the first female combat vet to serve in the Senate); like Texas Senator Ted Cruz, she's proposed eliminating the Internal Revenue Service.

Nevertheless, it might be wise to let Ernst gain more experience in the Senate.  Trump's camp could probably use a more seasoned hand to reassure voters that there's a steady hand at the helm.

4.) Former Speaker of the House Newt Gingrich (full disclosure:  I voted for Gingrich in the 2012 South Carolina primaries) - Newt was an early Trump apologist (if not outspoken supporter), and I think he probably "gets" Trump the most of any of the folks on this list.  Speaker Gingrich would bring to the Trump ticket the experience and policy knowledge it lacks, but without losing its slightly crazy, unpredictable, outsider edge.  Gingrich, in other words, provides the perceived benefits of the establishment without really being a part of it (even though he probably is).

Gingrich also approaches problems in unique ways--you've got to love a politician who counts Isaac Asimov's Foundation series as a major influence on his thinking--and is a fierce, knowledgeable debater.  His debate performance in a South Carolina Republican primary debate in 2012 pretty much won him the state, although he flamed out in Florida after vowing to have a functioning lunar research facility on the moon by the end of his second term.

And that's Gingrich's biggest flaw as a running mate:  as the man who would be the steady hand of the Trump campaign, Gingrich is not always predictable.  This could be a strength--a "doubling down" on the Trump formula--but it could also prove problematic for messaging in the general election.

Still, wouldn't you like to see a vice-presidential debate between Newt Gingrich and Elizabeth Warren? 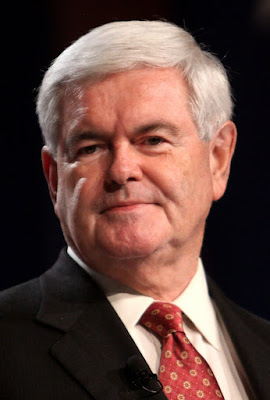 5.) Indiana Governor Mike Pence - Like Cotton and Ernst, my depth of knowledge about Pence is relatively shallow, although I know he has a reputation as a solid and effective governor in the State of Indiana.  Indiana is probably the reddest of the Upper Midwestern states, a crucial belt with swing states like Ohio.

Pence on the ticket would be the straight-man to Trump's pantheric chameleon, and would provide a great deal of stability to the campaign.  Pence strikes me as a less-embattled version of Wisconsin Governor Scott Walker (my initial favorite in the GOP presidential primary field before he dropped out of the race)--blandly inoffensive, a bit boring, but effective at bringing together the disparate factions of the fraying Republican coalition.

Pence could also help in a part of the country where blue-collar Democratic defection is crucial to swinging states to Trump.  Trump's electoral strategy seems to depend upon driving up white male voter turnout, and he's popular among those voters who have been hit hardest by globalization.  If enough of these "Trump Democrats" vote Republican, Trump could edge out wins in key states.

Of course, does Trump need a figure like Pence?  Pence's name recognition is not huge outside of the Midwest, and he doesn't seem to fit Trump's style.  That could be a useful contrast, but it could also deflate some of the excitement around Trump's campaign.  Controversial polemicist and die-hard Trump supporter Ann Coulter argues this very point in a recent piece for Human Events, "My VP Prediction:  Trump's First Mistake."

- Honorable Mention:  Alabama Senator Jeff Sessions -Senator Sessions is the poster-boy for stopping illegal immigration, but also for limiting legal immigration, a stance that was rare in both the Republican and Democratic parties prior to Trump's candidacy.  Ann Coulter argues in the piece linked above that Trump needs Sessions to stay in the Senate for precisely that reason.

For much of American history, having a Southerner on the ticket was often crucial to presidential victory, especially for Democratic candidates.  I don't think that holds true anymore (although Clinton and Gore were both Southerners, if you count Arkansas and East Tennessee as "the South").  The consistency of Southern states is such that vice-presidential candidates can be from further afield; if anything, it seems prudent to have a Midwesterner on the ticket.

Regardless, Sessions would be a good pick for the anti-globalist and immigration reform sides of Trump's campaign.  He would also provide some of the senatorial dignity that Trump lacks.  Alternatively, Sessions's rhetoric against globalization and immigration could be too much for some voters.  The GOP is already going to be slammed (I think unfairly) as "nativist" and "xenophobic," so maybe that doesn't matter, but perhaps an ounce of prevention could save a pound of troubles later.

- Wild Card - Lieutenant General Michael Flynn - As I predicted in my last post, Trump has thrown out a wild card.  Apparently, he's heavily considering bringing on a retired general, even against the advice of his advisors (either a sign of his "let Trump be Trump" media savvy, or a bad move on his part; we'll see).  One name he's floated is that of retired Lt. General Michael Flynn.  Flynn is a registered Democrat who the Obama Administration forced into retirement due to his (accurate) characterization of the threat of radical Islamism.  There's plenty there for Republicans to like.

Generals seem to do really well as presidential candidates, but have a spottier record when running for veep.  Consider, for example, Ross Perot's running mate, Vice Admiral James B. Stockdale, who's enigmatic utterances and strange campaign demands proved to be almost as big a liability to Perot's run as his own withdrawal and re-entrance in 1992.

Still, we can't judge the success or prudence of a military figure based on one example.  Trump could certainly benefit from having a general on the ticket, which could lend credence to his "speak loudly and carry a big stick, but don't use it too often" brand of foreign policy.  Trump is clearly positioning himself as the candidate of law and order, and he hopes to be the pro-military candidate, too.

These are my (admittedly unstructured) reflections.  I do not think this list is exhaustive, and I suspect it's almost a form of misdirection.  I would not be surprised if Trump pulled out a candidate that none of us suspect, al a John McCain with Sarah Palin in 2008 (though hopefully not quite so disastrous).

If this list is the One True List, I'd personally be very interested to see a Trump-Gingrich ticket.  The dynamism of such a ticket--Trump as the ever-jabbing pugilist, Gingrich as the precision bomber--would surely keep the Clinton campaign on its heels.  It would also lend Trump some credibility, but with a guy who's also just a little bit crazy himself.

Regardless, the next two weeks of VP speculation should be fun.

Now:  who will Hillary Clinton pick to be her running mate?
Posted by The Portly Politico at 6:30 AM