Last week, approximately 52% of Brits voted to "Leave" the European Union in a national referendum.  They did so peacefully and democratically.  Already, 23 June 2016 is being hailed as Britain's "Independence Day."

I've written several posts about Brexit recently (here, here, and here).  Last Friday's post, which I wrote as the results were coming in Thursday evening, explored why liberty--a vote for "Leave"--was worth the price of temporary economic disruption and, too, of giving up certain "benefits" bestowed to EU citizens.

(A quick aside:  I still find it interesting that a supranational organization that originated as an economic free trade zone evolved into an entity capable of forcing twenty-some-odd nation-states to pool sovereignty; didn't Europe fight two world wars to prevent Germany from ruling the Continent?  But I digress.)

Based on several comments on my Facebook page, and from personal conversations, it seems that some of my pro-Remain friends and colleagues missed this point, or very candidly admitted that national sovereignty and liberty are not worth the price of sweet EU bennies (one colleague--a reluctant Brit--discounted the entire "Leave" campaign as fundamentally xenophobic and racist, implying that those alleged qualities alone invalidated the entire movement).  To the latter contingent, I can only hope we can agree to disagree.  To the former, allow me to address some points.


One poster discussed at length that Brits have "become VERY accustomed to the benefits," and that, whether they are in the EU or not, they "will still be governed, regulated, and heavily taxed by their own government but no longer enjoy the goodies that come with EU membership!"

Consider, if you will, a drug addict.  Let's say someone addicted to heroin seeks treatment and begins taking daily doses of methadone.  Would we say, "Oh, well, sure he's off heroin, but he's still chemically dependent on methadone, and now he's missing out on the sweet high that only heroin can provide"?  Or would we continue to encourage this recovering addict to kick his methadone habit, too, and restore a sick, dependent body to healthy independence? 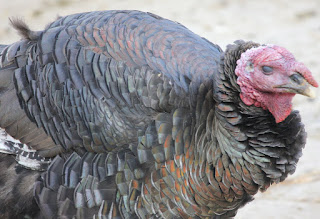 Quit me cold... and don't let me in the European Union.
(Source:  http://www.publicdomainpictures.net/view-image.php?image=28721&picture=turkey)

Generous government benefits--whether they come from the EU or the British government--might come with some nice "perks" (every pro-Remainer I've talked to seems preoccupied with the ability to travel freely through Europe, something most of us plebes haven't had the luxury of doing without a passport; this, to me, seems to be the definition of a "First World Problem"), but those "goodies" come at a price.  The British people have freely said, "Thanks, but no thanks."

Naturally, there will be those who will start jonesing for cheap travel opportunities to economically depressed parts of Southern Europe, where they can live out leisurely, government-funded retirements.  There will also be everyday people who still find themselves frustrated by high taxes and tight regulations, and missing out on certain opportunities afforded them by EU membership.


"The Brits have thrown off one level of bureaucracy because... they realized it was not worth the cost."


But is the solution more regulations and higher taxes?  The Brits have thrown off one level of bureaucracy because, despite the redistribution of wealth it brought (which mostly went away from productive countries like Britain and Germany and to profligate nations like Greece), they realized it was not worth the cost.  One of two things will now happen:  either Brits will demand further deregulation and reform of their own government, which will further ease their burdens and lower costs; or they will make an oft-repeated mistake and demand more redistribution and more taxpayer-funded goodies.

Crucially, though, the choice will be theirs to make.

Leaving the European Union will be like tearing off a bandage.  It will hurt like hell initially--we're already seeing the effect on markets, which can't stand uncertainty--but the pain will be fleeting (as I've argued in my earlier posts on the topic).

Similarly, any nation facing heavy regulations and stifling taxes can pursue a similar course--if it hasn't become too hooked already.  "Austerity" failed in Greece not because it demanded that the Greek government stop paying janitors wages comparable to skilled tradesmen; it failed because the Greek government couldn't kick its habit (and because austerity required tax increases, not stimulating decreases).  The nation--and the Greek people--have become so dependent upon handouts, they can no longer function without huge bailouts from wealthier nations.  That dependency will only perpetuate the cycle of addiction.

The best approach is not more dependency--more bureaucracy, more social programs, more taxes--but quitting cold turkey.  Rip off the Band-Aid, then get back to being free... or end up like Greece.

(Some parting notes:  to shield myself from slander and libel, let me make it clear that no xenophobia is intended or implied--I hope the Greeks can lift themselves out of poverty, which would be much easier if Germany had let them leave the European Union a year ago.  In this Wednesday's post, I'll discuss what might happen next now that Britain has voted to leave the EU.  That will likely be my last post on Brexit for awhile, as we return to the American scene.  --TPP)
Posted by The Portly Politico at 6:30 AM