The campaign of Alabama Senate candidate Judge Roy Moore is reeling after allegations that, in the 1970s and 1980s, Moore dated several teenage girls.  The Washington Post article that broke the news focuses on Leigh Corfman, who alleges that Moore approached her at the courthouse in Etowah County, Alabama, when she was only fourteen-years old.  After obtaining her phone number, Corfman claims Moore met with her and forced her to touch him over the underwear.

Several other women also told the Washington Post that they dated Moore while he was in his early 30s and they in their late teens.  These other women were between sixteen and eighteen (sixteen is the legal age of consent in Alabama), and report that their dates with the young deputy district attorney were respectful, involving no physical contact beyond hugging and kissing.  One of the women even said her mother was thrilled that her daughter was dating a successful attorney.

Judge Moore denied all of the allegations, but each day seems to bring some fresh revelation or twist.  He has since said that he may have dated some teenagers of legal age when he was younger.  The truth is difficult to discern, but here is what we do know:
Those last two points raise my eyebrows.  Here's a man who is no stranger to (political) controversy, the consummate culture warrior in an age when every political battle seems to connect to cultural and social values.  Moore's firm religious convictions make him evil in the eyes of progressive Democrats, and embarrassing to well-heeled, Establishment, country-club Republicans.

It's no secret that the Washington Post endorsed Moore's opponent, Democrat Doug Jones.  Then the Post sought out women who claim to have had encounters with Moore.  For a heavily left-leaning publication hoping to humiliate the sitting president and the Republican Party in a deep red state, the temptation to go after a popular but controversial populist figure would have to have been palpable.

The disdain of the Establishment Republicans for Moore (and, by extension, President Trump) could explain the fervor with which they have gone after Moore, calling for him to resign within mere hours of the Post's story breaking.  It's as though McConnell was just waiting for something like this to cross his desk, so he and other RINOs could rush out to denounce Moore and try to twenty-three-skidoo in their preferred candidate.

It seems that Republican leadership has succumbed to the same mania for virtue-signalling that dominates the Left.  I can barely read National Review--formerly one of my favorite publications--because of its consistently noodle-wristed editorializing whenever any populist-oriented Republican speaks out of turn.  Just read David French's off-putting essay on "creepy Christianity" here.  With friends like these, who needs enemies? 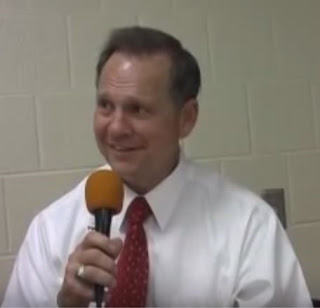 The worst of the accusations--the groping of the fourteen-year old and the incident in 1991--don't seem to fit the pattern of the stories the other women told the Post.  I'm fully willing to concede that, based on what we're learning now, a young Roy Moore dated some girls in their late teens.  He married a woman fourteen years his junior.  Clearly, he had a taste for younger women, but he hasn't committed adultery, as one of his most vocal critics, Senator John McCain, did, and his relationships, by all accounts, were above-board.  He's remained faithful--as far as we know--to his wife.

"For a heavily left-leaning publication hoping to humiliate the sitting president and the Republican Party in a deep red state, the temptation to go after a popular but controversial populist figure would have to have been palpable."

It may seem unorthodox now--and I am certainly not advocating that thirty-two-year old men start dating sixteen-year olds!--but such age-disparate relationships were more common and socially acceptable forty years ago.  For a fuller examination of this point, I refer you to Frank J. Tipler's piece at American Thinker; read it here.

Regardless, the Left has no logical grounds for objection.  How can a philosophical and political movement that endorses every sexual arrangement imaginable stand against legal, age-disparate, consenting relationships and maintain even a modicum of internal consistency?  Again, this is no endorsement of such relationships, but if you're the party of transgender, bisexual, polyamorous, gay, lesbian, queer, inter-species rights, how can you draw the line here?  You've already run miles past it.

Ultimately, squeamish National Review-and-Establishment types are claiming the moral high ground, arguing that a US Senate seat isn't worth sacrificing principles.  At this point, though, their haste to condemn Moore smacks of moral cowardice and political opportunism.  Are they not going to at least entertain the idea that the man is innocent, or was just a bit unorthodox in his dating habits forty years ago?  Rather than try to scuttle a still-popular candidate before he barely has a chance to defend himself, could not McConnell and other Senate Republicans attempt to reach out to the Moore campaign?  Even if he's not your style of Republican, you could learn to work with him, rather than prome to expel him from the Senate if he wins!

This video from Stefan Molyneux (below; WARNING--NSFW) gets down to brass tacks:  preserving the Republican's razor-thin majority in the Senate is worth showing some political backbone, rather than allowing a partial-birth abortion-supporting Democrat to snag the seat.

This election suggests that Establishment Republicans, for all their talk of decorum and principles, are sometimes little better or different than their Democratic opponents.  They don't want a scrappy culture warrior  And despite some dire poll numbers, the accusations may not stick:  according to RCP polling, Moore was up 3 points over Jones (as of 14 November), though he has fallen to a far more dicey 0.8% lead (as of 16 November, the date this post was written).  That's within the margin of error, though certainly not the double-digit lead Republicans want in Alabama.  More on those poll numbers, and my analysis of them, to come.

If we learn that Moore did indeed assault Leigh Cofrman, than I'll retract my defense of him immediately.  But for now, we have no consistent pattern of bad behavior, and what appears to be some very powerful opponents arrayed against a man who has suffered professionally for his beliefs.  From where I'm sitting, Judge Moore's treatment looks more like persecution than justice.
Posted by The Portly Politico at 6:00 AM